Home > Back to Search Results > Team photos of the Giants, Dodgers, and New York Americans... Babe Ruth as a first baseman, in 1914...
Click image to enlarge 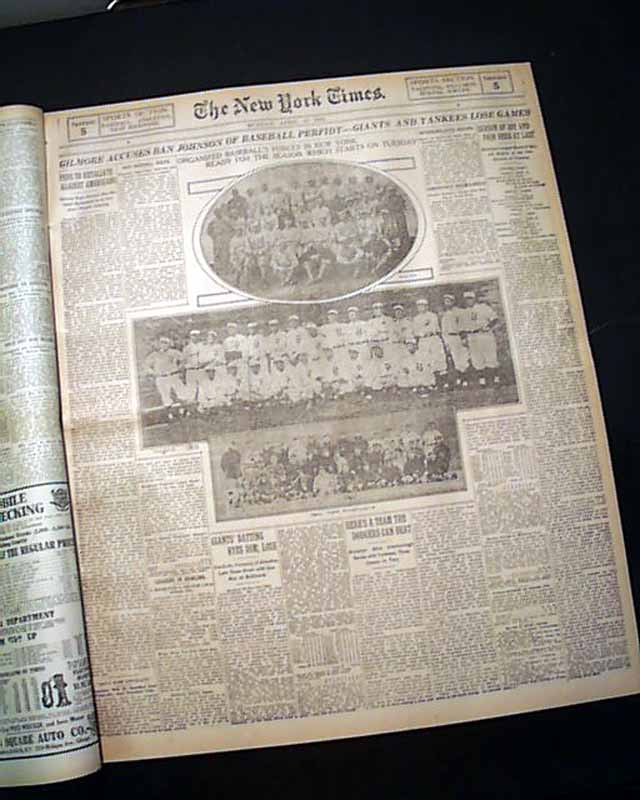 
THE NEW YORK TIMES, April 12, 1914  This issue contains a very rare and quite early mention of Babe Ruth as a Baltimore Oriole. A rather small, inconspicuous report on the sports page of this famous title is on a game between the N.Y. Giants & the Baltimore Orioles (then of the International League), when Babe Ruth was a member of the Baltimore team. This is one of the earliest reports on Babe Ruth the baseball player to be had. His name is mentioned in the box score as a first baseman, apparently a replacement (see photos). The issue also includes team photos of the New York Giants, the Brooklyn Dodgers, and the New York Americans, all on the same page.
Being so early in his career and a relative unknown to the world of baseball, there is obviously no fanfare attached to his game results, a situation which would change dramatically before the decade would end. Always nice to find items of significant people long before they would be prominent in the world of sports or politics.
You get the complete 50+ page issue in very nice, clean condition.