Home > Back to Search Results > Attempts at brokering a peace... Battle of White Plains...
Click image to enlarge 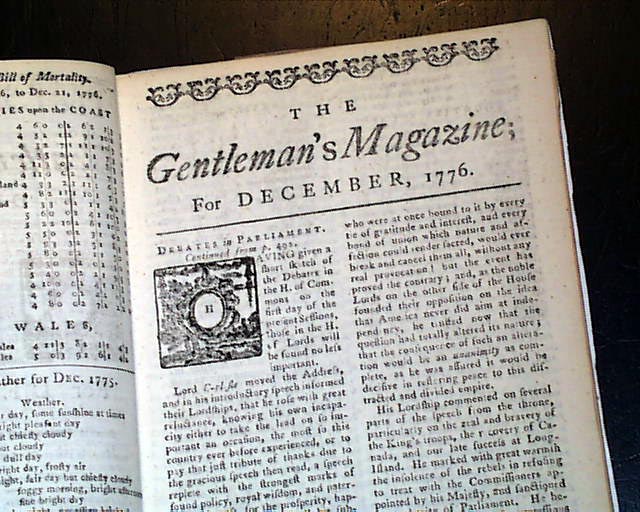 The first article has five pages taken up with: "Debates in Parliament" which include much discussion on the situation in America.
This significant issue contains General Washington's actual correspondence with General Howe and Lord Drummond on the prospects of an early peace, which would mean the Americans would have to abandon their Declaration of Independence.  The correspondence among the three is fascinating reading.
Lord Thomas Drummond was a well-known and influential New Yorker, personally acquainted with several members of the Continental Congress. As tensions grew between England and her American colony, Lord Drummond attempted to broker a compromise between the two sides. The Lords agreed it would be preferred to settle the differences peacefully and avoid going to war. Drummond returned to the colony with the "unofficial" directive that if the Americans were to make an "offer" so that England would be able to "retain her country's honor", the issues at dispute would be agreeable resolved. Such an agreement never happened.
There is also information from the Continental Congress signed in type: "John Hancock," on the possible POW exchanges including the famous Ethan Allen, plus there is a lengthy editorial by a British gentleman who rails against the wording of the Declaration of Independence, citing phrases like passages such as "all men are created equal," and "certain unalienable rights," etc.
Also: "Strictures on Philander's Defence of the American Congress" and: "Account of the Proceedings of the American Colonies" talks of the war in the New York vicinity around the Bronx, White Plains, etc., mentioning: "...his Majesty's light troops took possession of the heights of New Rochell..." and: "...On the 25th the advanced corps moved forward to the road which leads to the White Plains where the rebels appeared determined to make a stand..." with more on the battle of White Plains which followed a few days later.
Also a bit on: "A Brief Description of the Country where the war is now carrying on in New York". There are other articles concerning America and the war as well, one item noting: "...As it is generally believed that General Washington has retreated, we should think he has taken the road for New England; for on those lovers of rebellion upon principle he can most depend...".
Includes the fold-out plate called for.
Complete in 48 pages, full title/contents page featuring an engraving of St. John's Gate, 5 by 8 inches, very nice condition.
Note: one interior leaf is present in photocopy, however it does not contain any of the mentioned reports.