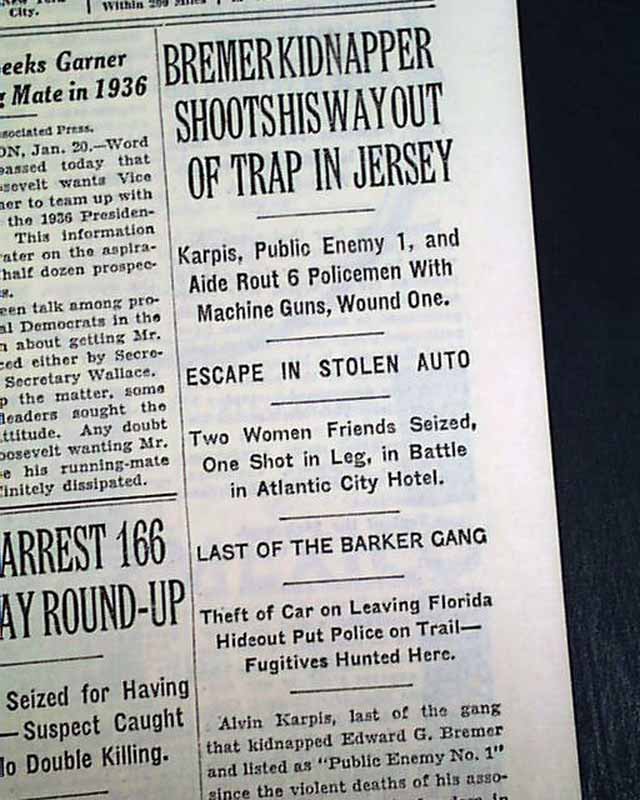 The top of the front page has a one column heading: "BREMER KIDNAPPER SHOOTS HIS WAY OUT OF TRAP IN JERSEY" with subheads. (see) First report coverage continues on page 3 with a few related photos. (see) Lengthy text. Always nice to have notable events in history reported in this World famous publication.
Other news, sports and advertisements of the day. Complete in 34 pages, this is the rare rag edition that was produced on very high quality newsprint, with a high percentage of cotton & linen content, allowing the issues to remain very white & sturdy into the present. Given the subscription cost, libraries & institutions rather than individuals were the primary subscribers of these high-quality editions. Nice condition.


wikipedia notes: Just after Ma and Fred Barker's death in a shootout with the FBI on January 16, 1935, Karpis nearly met his own violent end when the FBI located him in Atlantic City, New Jersey. Karpis and Harry Campbell managed to shoot their way to an escape, though Karpis' eight-month-pregnant girlfriend Dolores Delaney was hit in the thigh by a wild shot fired by Campbell. She was captured along with Campbell's girl. Dolores gave birth to a son, who was adopted by Karpis' parents. Karpis and Campbell hid out with brothel-keeper Edith Barry for several months.