Home > Back to Search Results > Babe Ruth vs. Walter Johnson in a pitcher's duel...
Click image to enlarge 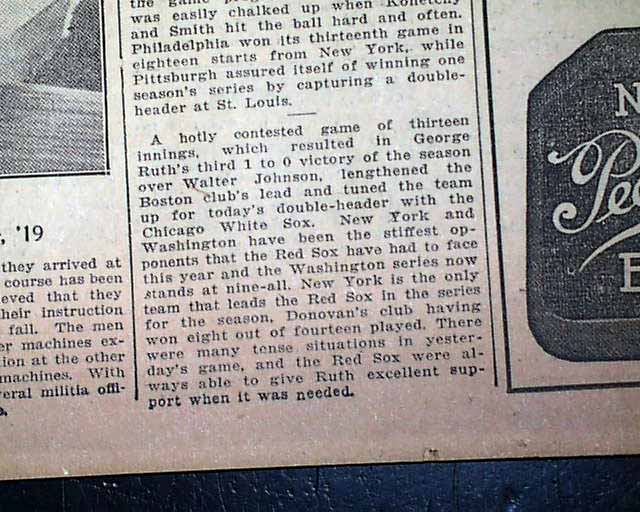 * Babe Ruth vs. Walter Johnson pitching duel
* Early coverage for Ruth, before he was a Yankee
* Best publication to be had ? - very rare as such

Near the bottom of the back page is a brief yet very historic report with small heading: "Red Sox Increase Lead After Great Battle with Washington" with the text beginning: "A hotly contested game of thirteen innings, which resulted in George Ruth's third 1 to 0 victory of the season over Walter Johnson..." This was Babe Ruth from early in his career when he was a pitcher for Boston, against fellow Hall of Famer Walter Johnson. Unfortunate for the small report here but it was somewhat typical of the day.
Great to have this report in a Boston newspaper, where the game was played. Very rare as such.
Complete in 14 pages, light toning and a little wear at the margins, generally nice. Should be handled with care.