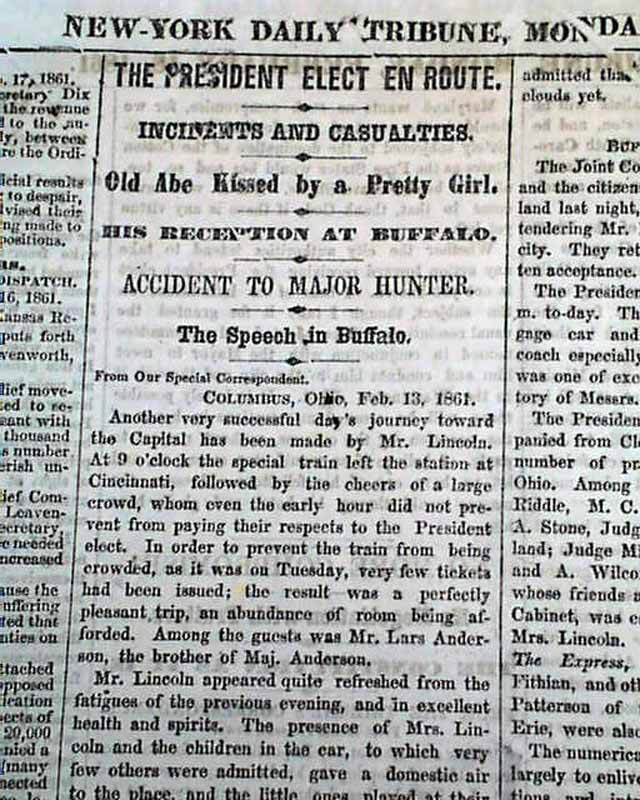 Over half of page 5 is taken up with fine and detailed coverage of Lincoln's continued trip from his home in Illinois to Washington, D.C. The heads include: "THE PRESENT ELECT EN ROUTE" "Incidents and Casualties" 'Old Abe Kissed by a Pretty Girl" "His Reception at Buffalo" "Accident to Major Hunter" "The Speech in Buffalo".
Perhaps the best content is the famous story (pg. 5, col. 4) of the little girl who told Abraham Lincoln he should grow his whiskers, reading: "...he had received a letter from a young girl of this place in which he was kindly admonished to do certain things, and among others to let his whiskers grow, and that, as he had acted upon that piece of advice, he would now be glad to welcome his fair correspondent, if she was among the crowd. In response to the call a lassie made her way through the crowd, was helped on the platform, and kissed by the President...".
This event was reported by very few newspapers of the day.
Eight pages, never bound nor trimmed, minor wear at the margins and a frew front leaf creases, good condition.