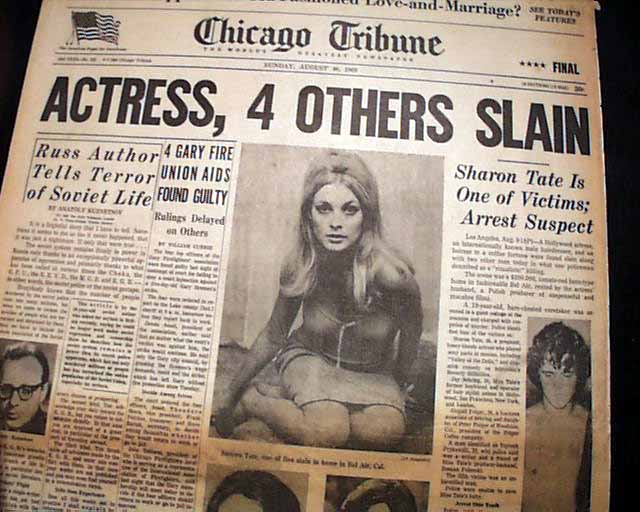 Charles Manson and the Tate murders...

A terrific and early report considered by some to be the "crime of the century", the murder of Sharon Tate and four others, which would ultimately be found to be the work of the followers of Charles Manson.
This report is so early that it does not include the murder of Mr. & Mrs. LaBianca which happened on the day this newspaper was published.
The bold banner headline announces: "ACTRESS, 4 OTHERS SLAIN" with subhead: "Sharon Tate Is One of Victims; Arrest Suspect". The front page also includes photos of Sharon Tate, the houseboy William  Garretson who was originally charged with the murders (but would soon be released), Abigail Folger, Jay Sebring, and a bird's-eye view of the: "...Bel Air home where five were slain." Coverage continues on page 2 with another photo of the home of Actress Sharon Tate, and a photo of Roman Polanski.
It would be nearly five months before Charles Manson and his "Family" would be tracked down & tied to the murders. A notable report of this horrendous event that has become a part of modern culture, and rarely found as it was not an event commonly saved.
The complete first section with 20 pages, toning to portions of the front page (see photos), minor margin wear, generally in good condition.