Home > Back to Search Results > Causes & Necessities for Taking Up Arms...
Click image to enlarge 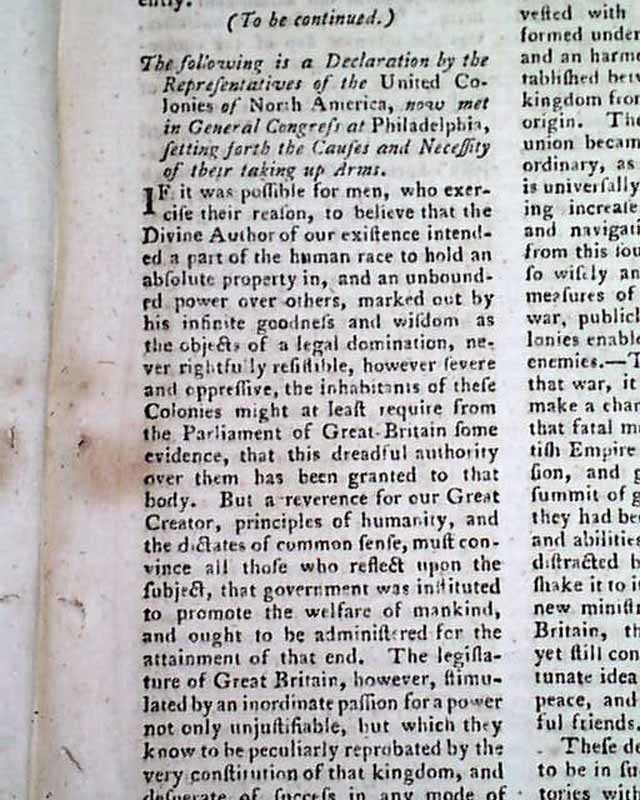 Causes & Necessities for Taking Up Arms...

Item # 673247 THE GENTLEMAN'S MAGAZINE, London, August, 1775  Taking 3 1/2 pages is "a Declaration by the Representatives of the United Colonies of North America, now met in General Congress at Philadelphia, setting forth the Causes and Necessities of their taking up Arms", signed in type at the end: John Hancock & Charles Thomson, dated "Philadelphia, July 6, 1775".
This famous document, written by John Dickinson and Thomas Jefferson, rejected the idea of independence, but insisted that Americans would rather die than be enslaved. This very significant report remains one of the more significant documents desired in a newspaper or magazine of the day.
Further on is: "The Outlines of a Plan for Conciliating the Political Interests of Great Britain & her North American Colonies", essentially a plan for making amends before the war progresses any further. Includes are fourteen points, with the article taking over a full page.
Also in the issue is: "Proceedings of the American Colonies" which takes 5 1/2 pages, and includes details about the battle of Bunker Hill, with word that Dr. Warren was killed in the action. Also has an address: "The Twelve United Colonies, by their Delegates in Congress, to the Inhabitants of Great Britain", signed in type: John Hancock & Charles Thomson, followed by other bits of news including: "...Among other transactions, the Congress have appointed George Washington, Esq; of Virginia, Generalissimo of the American forces...".
Although one foldout road map of England is called for, two are present.
Simply terrific & historic Revolutionary War content in this issue. Complete in 56 pages, 5 by 8 1/4 inches, nice condition.