Home > Back to Search Results > With both maps, of Chagre and St. Augustine...
Click image to enlarge 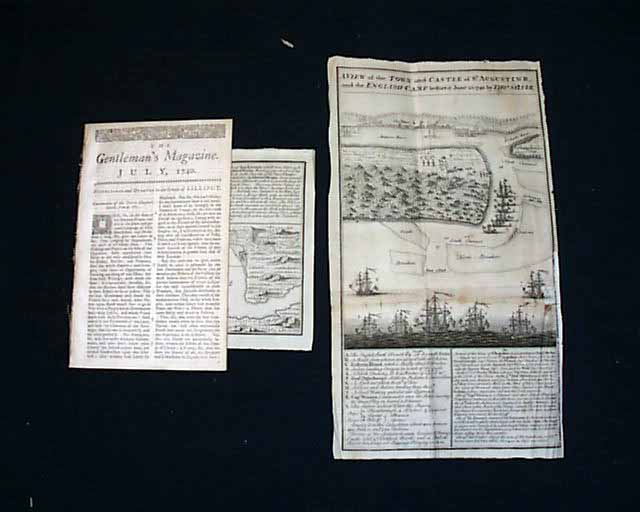 With both maps, of Chagre and St. Augustine...

Item # 673228 THE GENTLEMAN'S MAGAZINE, London, November, 1740  Certainly the prime feature of this issue is the terrific foldout map titled: "A View of the Town and Castle of St. Augustine, & the English Camp before it June 20, 1740" which is a very nice print showing the castle along the Matanza River plus the position of various ships, troops, and other features noted in the key beneath the print . The map measures 6 7/8 by 12 1/4 inches. A very early map of St. Augustine & the vicinity.
Due to some loss at the right side, bottom half, a small portion is present in facsimile, done on genuine 18th century paper, affecting a small portion of one of the ships and the border to the bottom half of the right side (see photos).  The bottom quadrant of the map is a key to the map with accompanying text concerning the siege of St. Augustine. And there is an article in the magazine relating to the map as well.
An article near the back which relates to the map includes: "A letter in the Daily Post...from Charles Town in S. Carolina, having laid the ill success at Fort St. Augustine on the ill conduct of...some particulars of which are..." with more.  This is followed by another article which includes: "...letter misrepresenting in the most false & malicious manner the late expedition against St. Augustine, aiming thereby to defame the character of a gentleman, whose unwearied endeavours for the publick service has greatly impair'd his health; and as I, who am a captain in General Oglethorpe's regiment was present..." with more, taking over half of the page.
Additionally, present is a foldout map: "An Exact Draught of the Castle of San Lorenzo & Village & River of Chagre..." which is in present day Panama. This map measures 6 by 7 1/2 inches, in very nice condition.
Curiously, these two maps are sometimes found in the July, 1740 issue, as both issues have articles relating to St. Augustine.
Complete in 48 pages, 5 by 8 inches, full title/contents page featuring an engraving of St. John's Gatge, very nice condition.