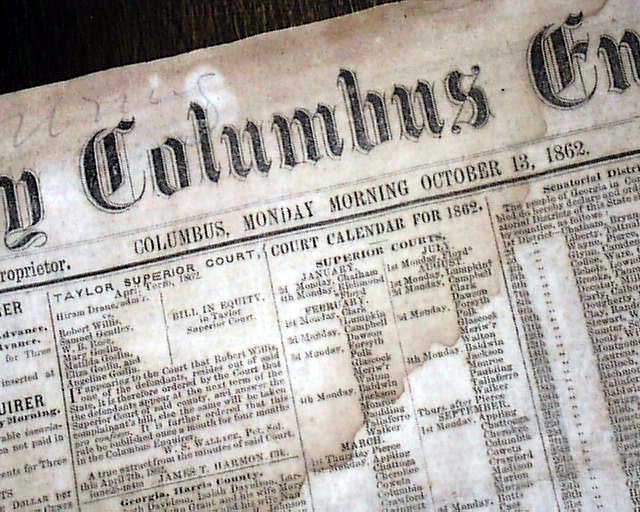 Certainly one of the less common Confederate titles from the Civil War. Columbus is in Southwest Georgia on the Alabama border very near Montgomery.
Among the various reports inside are: "The Late Battle at Corinth" "From the Line of the Potomac" ""An Army Anecdote" "Hung in Effigy" "Latest From Wilmington, N.C." "Another Brilliant Affair" "Gen. Lee's Address to His Army" in which he: "...recounts their achievements with eloquence, and delivers to them the thanks of the President, and bestows, in feeling terms, the praise they have so well earned." which is signed in type: R. E. Lee. Included also is another letter signed in type: R. E. Lee, headed: "Another Brilliant Affair". Still more reporting on the Civil War from the Confederate perspective.
Most of the back page is taken up with the: "Constitution of the State of Georgia, Ratified July 2, 1861".
Four pages, light toning and light water staining, minor margin tears and a few small archival mends at inside margins.

The Yankees in the South...