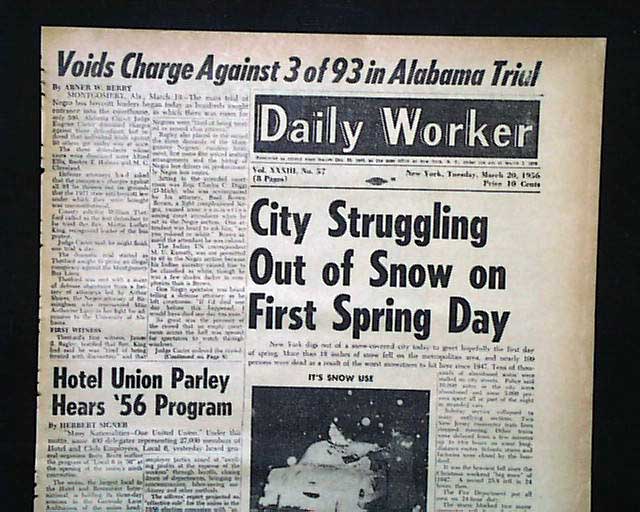 
DAILY WORKER, New York, March 20, 1956  The top of the front page has: "Voids Charge Against 3 of 93 in Alabama Trial" which begins: "The mass trial of Negro bus boycott leaders began today... Alabama judge Eugene Carter dismissed charges against three defendants, but ordered that individual trials against 90 others get underway at once." The article continues: "Thetford's first witness, James S. Bagley, testified that Rev. King had said he was 'tired of being treated with discourtesy' and that Negroes were 'tired of being treated as second class citizens.'" Coverage continues onto page 8.
This is on the Montgomery bus boycott, a political and social protest campaign against the policy of racial segregation on the public transit system of Montgomery, Alabama. It was a seminal event in the civil rights movement.
Eight pages, rejoined at the spine with no loss, two small holes on the back leaf not impacting mentioned content, generally nice.
Note: this newspaper was published by the Communist Party USA, ending in the mid-1950's.