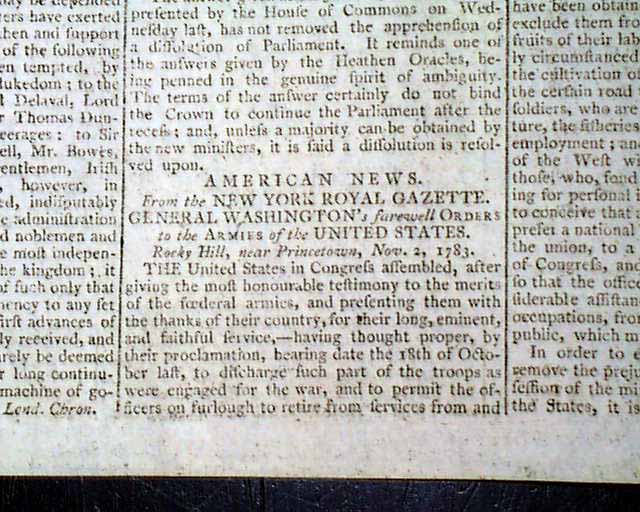 Certainly the most notable & historic content is the full text printing of: "General Washington's Farewell Orders to the Armies of the United States", a very historic & notable document datelined: "Rocky Hill, near Princetown, Nov. 2, 1783." It takes portions of both pages 2 and 3.
It reads in part: "...A contemplation of the compleat attainment (at a period earlier than could have been expected) of the object for which we contended, against so formidable a power, cannot but inspire us with astonishment and gratitude--The disadvantageous circumstances on our part, under which the war was undertaken, can never be forgotten--The singular interpositions of Providence in our feeble condition were such as could scarcely escape the attention of the most unobserving, while the unparalleled perseverance of the armies of the United States, thought almost every possible suffering & discouragement, for the space of eight long years, was little short of a standing miracle...".
The full text is confirmed by several websites.
As if this was not sufficient for one issue, another page has the report noting in part: "...The government advices from New York contain an account that the King's troops evacuated that city on the 28th of last month; General Washington then marched in at the head of the American troops, which consisted of about 1200 men, officers included, when he took possession of all the posts the British had left..." with more on the celebration.
Eight pages, 8 1/2 by 11 1/2 inches, some dirtiness & light rubbing to the front page only, otherwise in very nice condition as the photos show.