Home > Back to Search Results > Treaty of Fontainebleau on the French & Indian War... Much on America...
Click image to enlarge 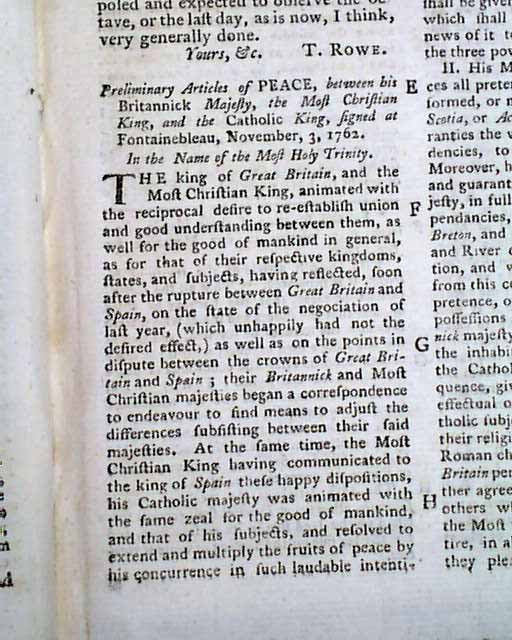 Treaty of Fontainebleau on the French & Indian War... Much on America...

Item # 670208 THE GENTLEMAN'S MAGAZINE, London, December, 1762  Perhaps the most significant content is the full text of the: "Preliminary Articles of Peace..." signed at Fontainebleau, Nov. 3, 1762, among England, France & Spain, which would set the stage for the formal Treaty of Paris that would end the Seven Years' War (French & Indian War for that portion fought in the Americas).
This text takes over 4 1/2 pages and has much concerning how the land in America, Canada, and the Caribbean Islands would be divided among the 3 countries to reach an amiable end to the war. This settlement would, however, be contested again in the Revolutionary War.
Further on in: "Account of Periodical Papers' there is more content concerning the American situation and North American Indians as discussed in other newspapers. There is also over half a column description of Florida.
Also of interest is: "Queries about Settling in the New American Colonies", which asks: "...Whether persons going to settle at the government's expence, will be confined to the spot at first allotted them, or whether upon not liking their situation in one colony they may repair to another?...".
Included is the large foldout map of Silesia showing the area along the Elb River. Selesia is in Central Europe mostly comprised of present-day Poland.
Near the back is the "Historical Chronicle" which has the latest news reports of the day, mostly European.
Complete in 48 pages, 5 by 8 1/4 inches, full title/contents page featuring an engraving of St. John's Gate, very nice condition.