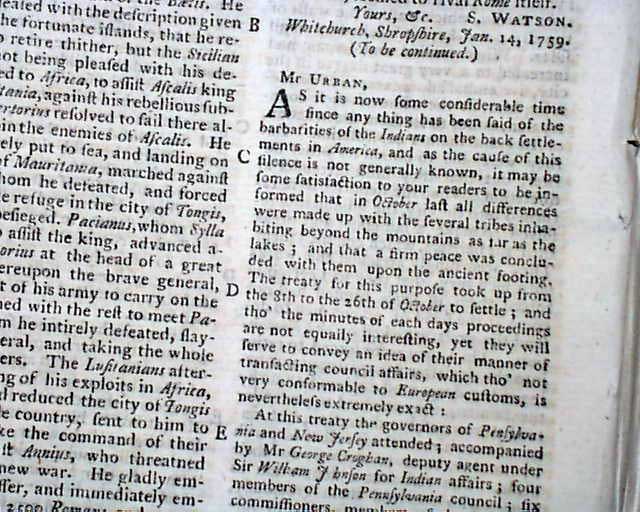 Item # 667355 THE GENTLEMAN'S MAGAZINE, London, March, 1759  Certainly the prime content is the very nice foldout map titled: "A Map of Martinico from the latest & best Authorities." with an inset labeled: "A Map of that Part of Guadaloupe where the English made their Defense, Jan. 23, 1759."
The map shows considerable detail and measures 8 1/4 by 10 1/4 inches and is in great condition. There is a related article titled: "Description of Guadaloupe" as noted in the table of contents.
Another notable item is a report on a treaty with the Indians in Easton, Pennsylvania. The article takes the equivalent of a nearly a full page and includes: "...At this treaty the governors of Pennsylvania & New Jersey attended...These were met at Easton, about 90 miles from Philadelphia by the Mohawks, Oneidoes, Onondagoes, Cayugas, Senecas, Tuscaroras, Nanticokes, and Conoys, Tuteloes, Chugnuts, Delawares and Unamies, Munseys..." with more.
Complete in 48 pages, full title/contents page, 5 1/4 by 8 1/4 inches, very nice condition.