Home > Back to Search Results > Much on the desperate situation in Texas... The Fanning Massacre...
Click image to enlarge 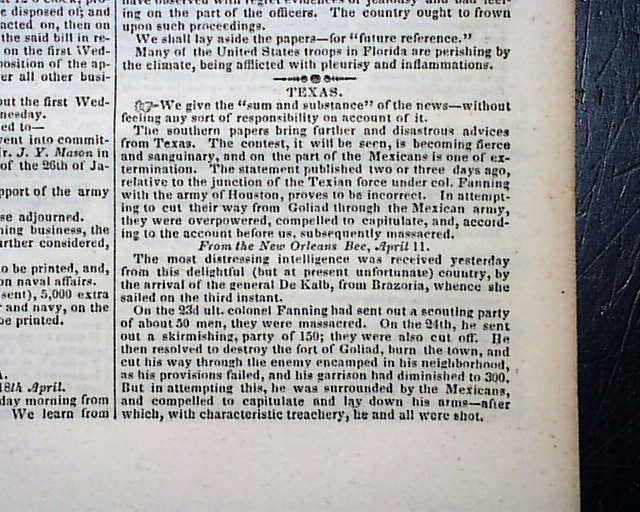 Much on the desperate situation in Texas... The Fanning Massacre...


NILES' WEEKLY REGISTER, Baltimore, April 30, 1836  An inside page contains an article headed simply: "Texas" which includes several reports on events there, including: "The southern papers bring further & disastrous advices from Texas. The contest, it will be seen, is becoming fierce & sanguinary, & on the part of the Mexicans is one of extermination...the Texian force under col. Fanning with the army of Houston...they were overpowered, compelled to capitulate, and according to the account before us, subsequently massacred."
This is followed by another report stating: "On the 23d ult colonel Fanning had sent out a scouting party of about 50 men, they were massacred...he was surrounded by the Mexicans, and compelled to capitulate and law down his arms--after which, with characteristic treachery, he and all were shot."
Another report notes: "The Texians have actually become desperate from the massacres, and situation of their affairs. They have burned San Felipe de Austin; and destroyed all the country in their retreat..." with more.
Yet another brief report references the Alamo in stating: "The bodies of Col. Travis & his little band were burned by order of Santa Anna. The lady of lieut. Dickinson was within the fort and begged to share the honorable fate of her husband...sent her away with the servant who carried this news...". And further on is yet more reporting including: "...all the settlements situated between the river Nueces and Los Brazos (San Felipe de Austin included), as overrun by the Mexican troops, who give no quarter to those taken with arms in their hands." and more.
Simply a great wealth of content on the dire situation in Texas, taking over a full page.
Sixteen pages, 6 by 9 1/2 inches, very nice, clean condition.