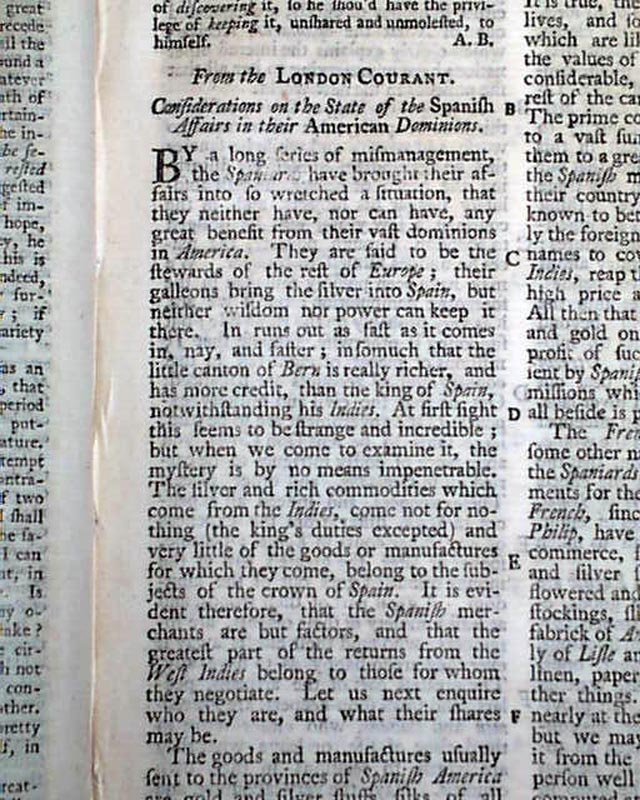 One of the better articles in this issue is: "Considerations on the State of the Spanish Affairs in their American Dominions" which takes over 2 pages.
Over a full pg. is taken up with: "Electrical Experiments Proposed". Among the "Poetical Essays" is one titled: "A Hymn for the 9th of October 1746 being the Thanksgiving day for the Victory over the Rebels at Culloden" which was essentially the end of the Jacobite Rebellion.
Included is the nice & very detailed foldout map of: "ITALY..." measuring 9 1/2 by 11 1/2 inches and is in very nice condition.
Among the various articles in this issue are: "A Short Account of the Tryal of Simon Lord Lovat before his Peers at Westminster Hall" which takes 6 pgs; "Romantic Story of a Nun" "Nature & Properties of Insects" a full pg. sheet of music titled: "A Hunting Song", and much more.
Also included is the other plate called for, a two-page foldout: "Plan of the Scaffolding in Westminster Hall".
Complete in 48 pages, full title/contents page with an engraving of St. John's Gate, 5 by 8 inches with, very nice condition.