Home > Back to Search Results > The Jacobite Rebellion... Battle of Culloden....
Click image to enlarge 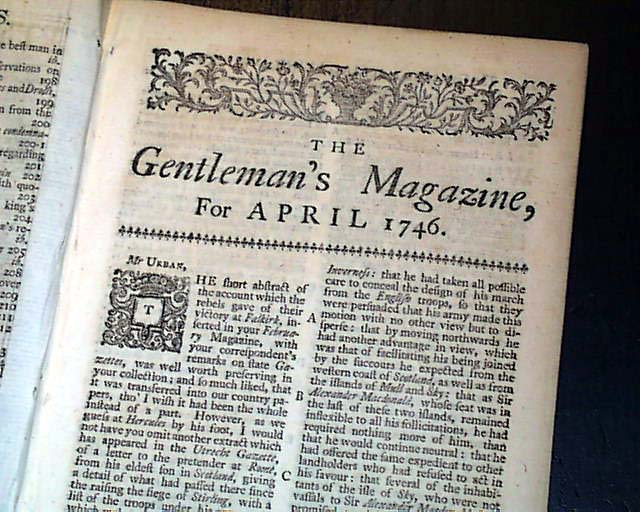 The Jacobite Rebellion... Battle of Culloden....

There is much fine content on the Jacobite Rebellion including the very first article noted in the table of contents as: "The Young Pretender's reasons for Retiring from Stirling & account of his affairs in Scotland, sent to his Father".
Additional content on the Rebellion is found in over 8 pages of: "Accounts of the Motions of the Rebels and of the King's Forces from the London Gazette...", which includes numerous reports including "Journal of what passed at Fort William" "Siege of Fort William Raised" and "Rebels Totally Defeated".
But by far the most significant item is the historic account of the Battle of Culloden, which signaled the end of Bonnie Prince Charlie's (the Young Pretender) hope of regaining the crown of England. It is headed: "The afternoon a Messenger arrived from the Duke of Cumberland with the following Particulars of the VICTORY obtained by his Royal Highness over the Rebels, on Wednesday the 16th instant near Culloden." which continues with much detail to take over two pages, and includes the "List of Killed and Wounded". Not only a very historic report, but a very early one as well.
Three pages are taken up with a: "List of Ships taken on both Sides" with many mentions of ships bound to or from America. Also: "A Poetical Essay on the Reduction of Cape Breton" which takes over a full page. Another poem is: "On the Rebels Flight at the Duke's Approach" & more concerning the Jacobite Rebellion.
Near the back is the "Historical Chronicle" which has various news reports from throughout Europe. Included in these reports are more accounts concerning the Battle of Culloden.
Included is the full page plate showing various images with related text describing the items.
Complete in 56 pages, 5 by 8 inches, full title/contents page, great condition. 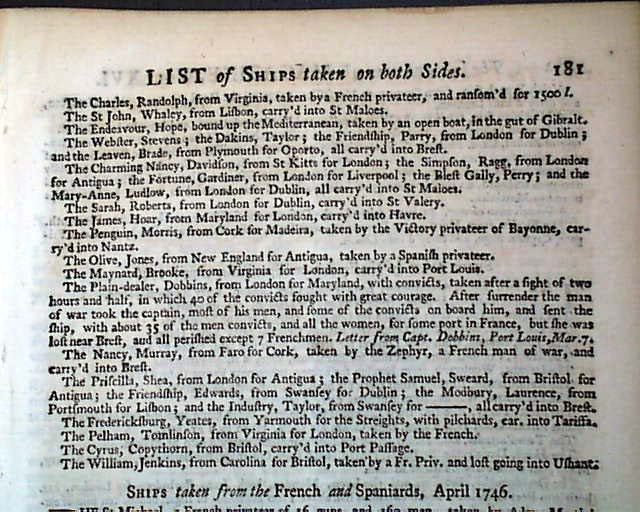 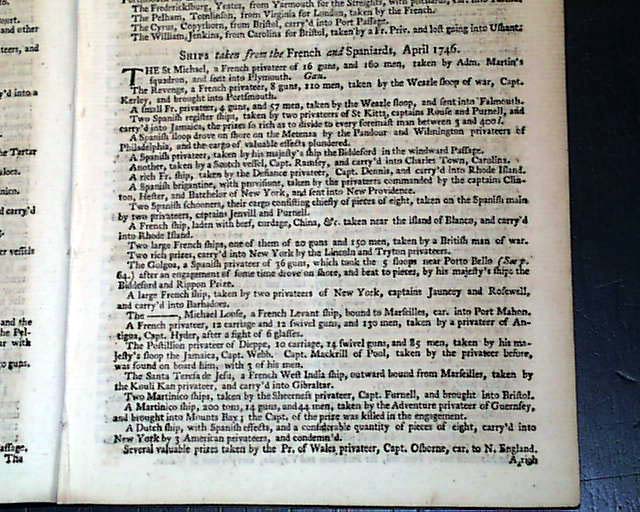 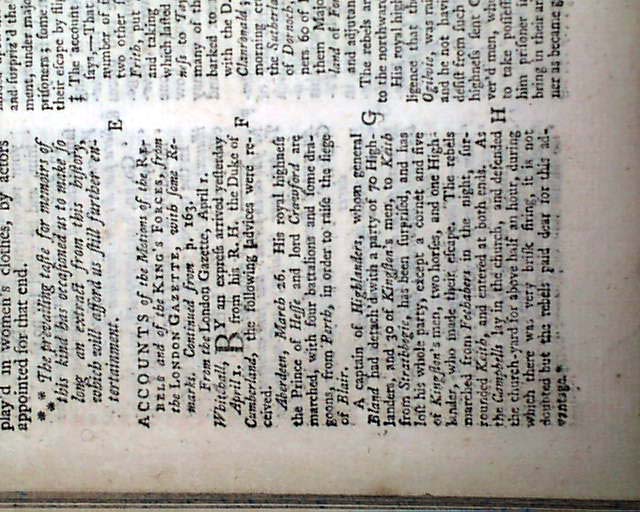 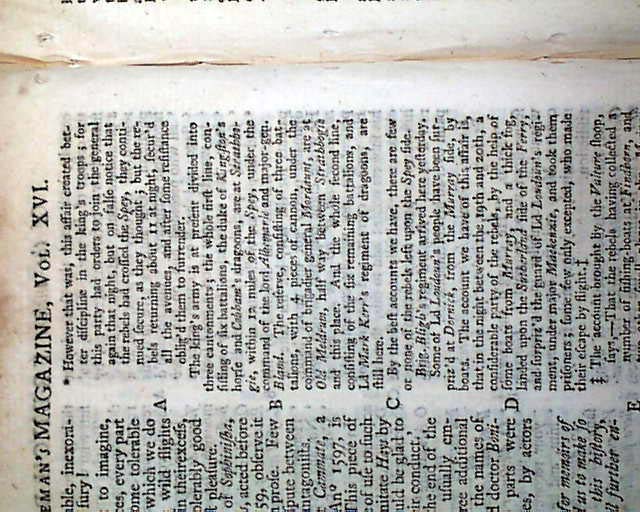 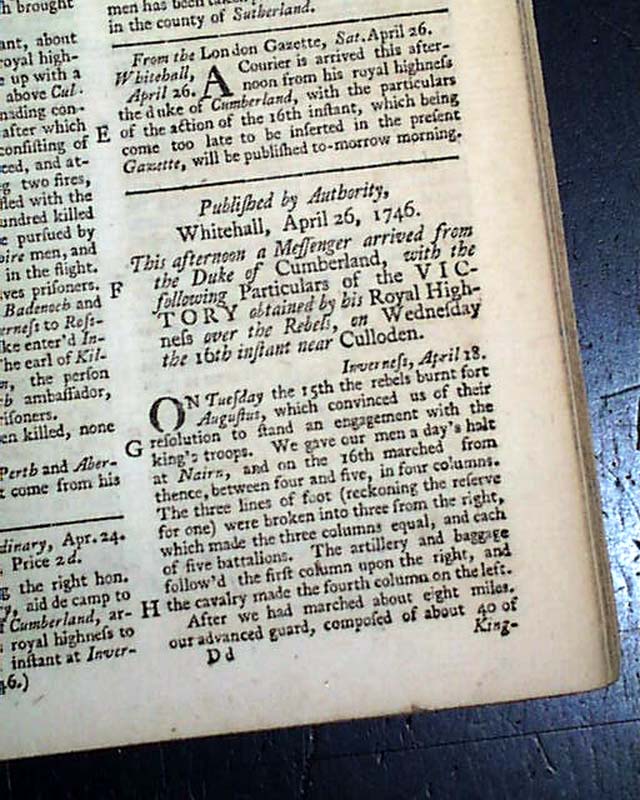 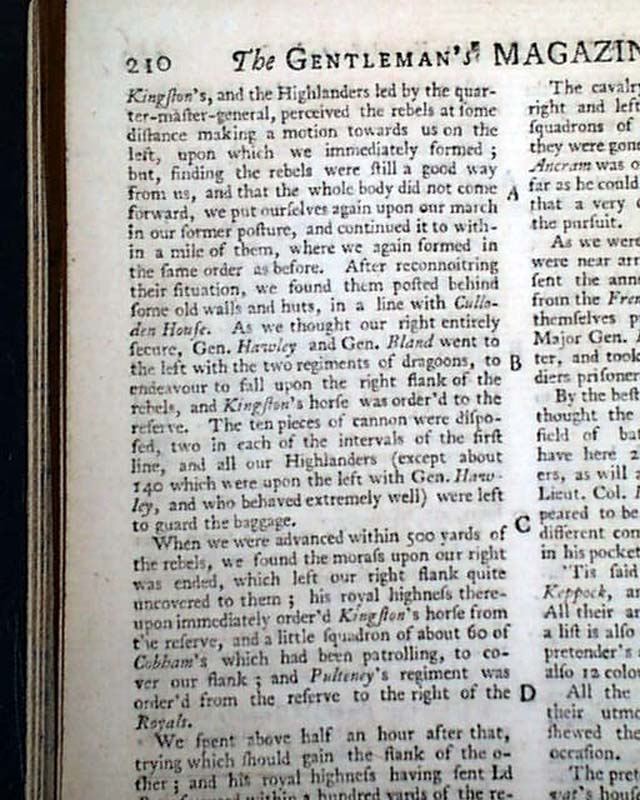 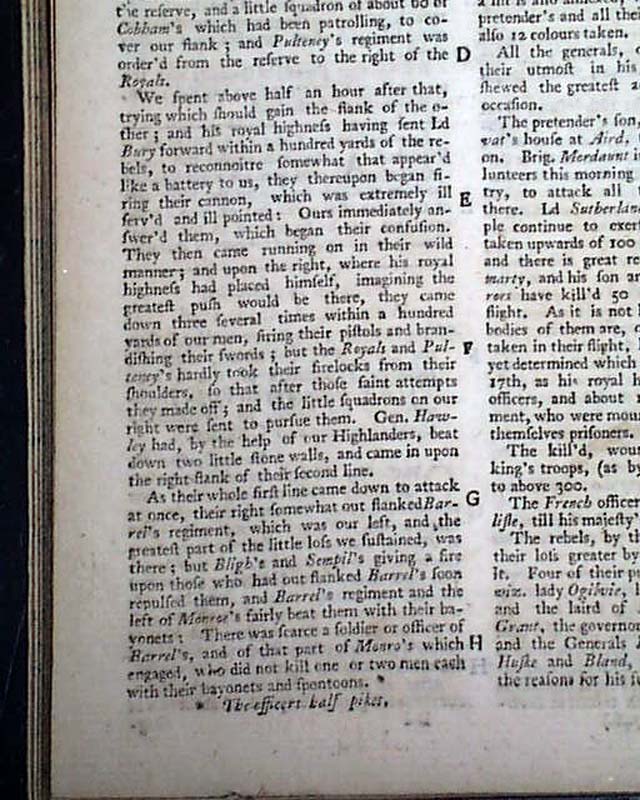 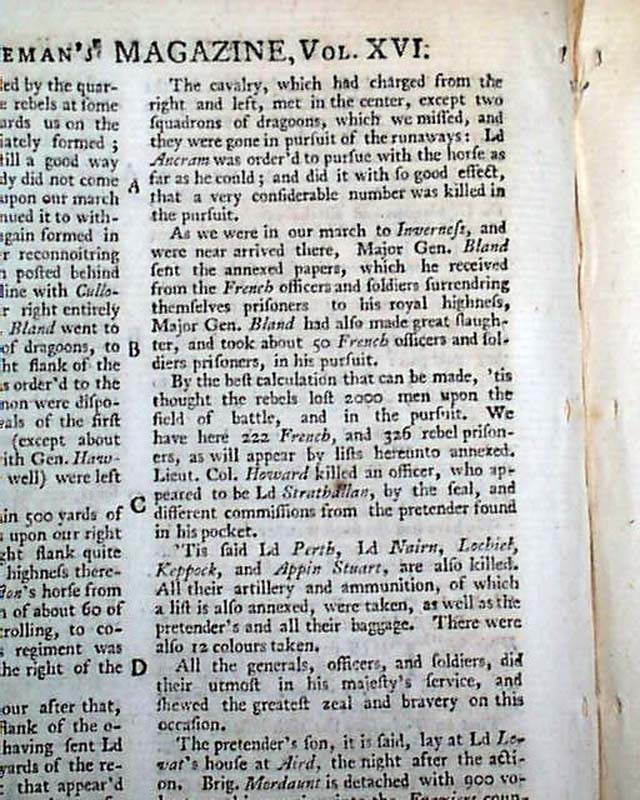 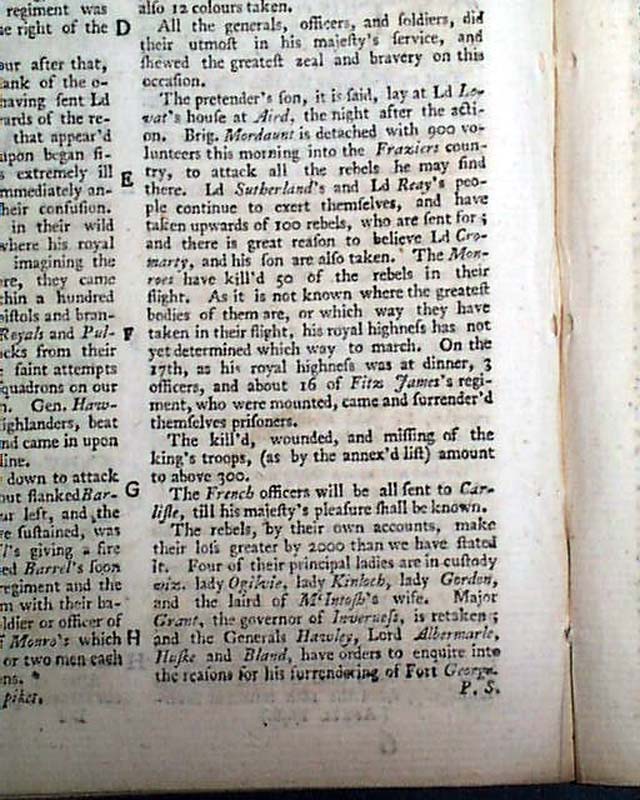 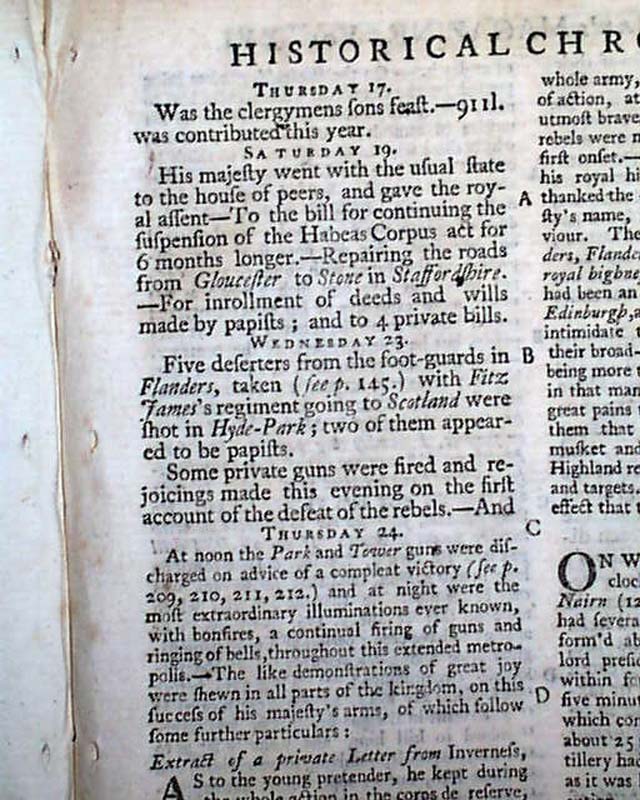 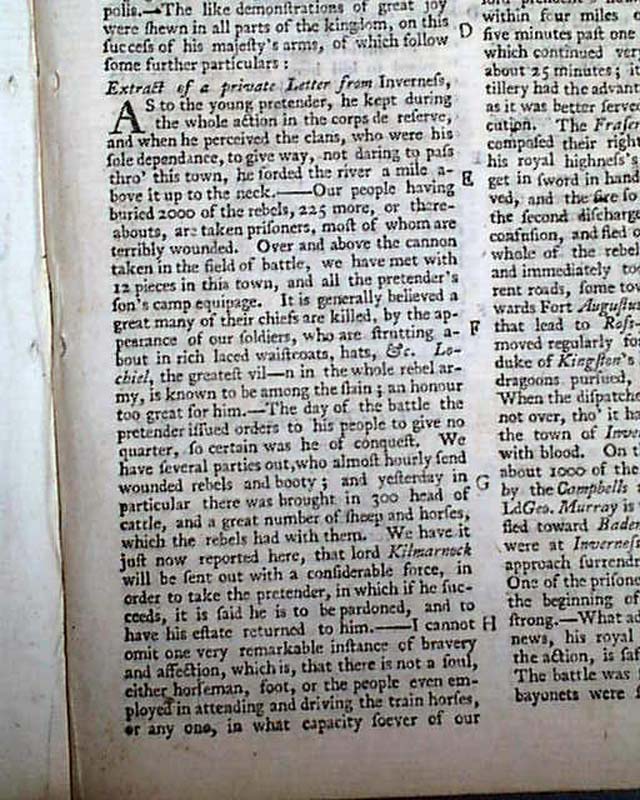 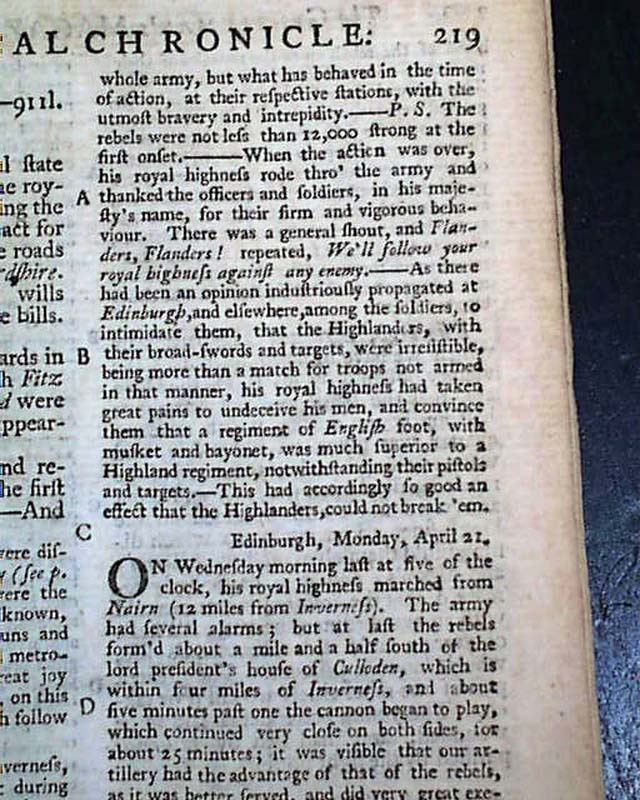 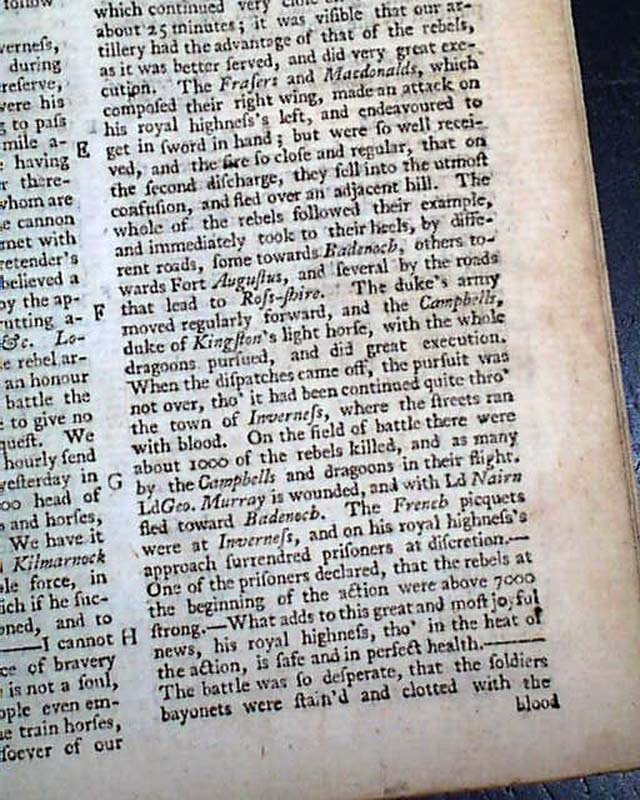 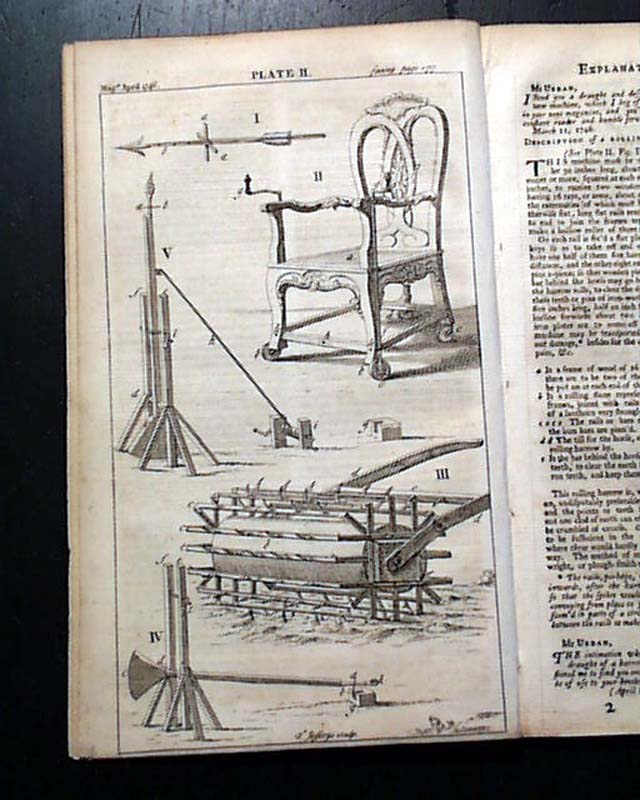 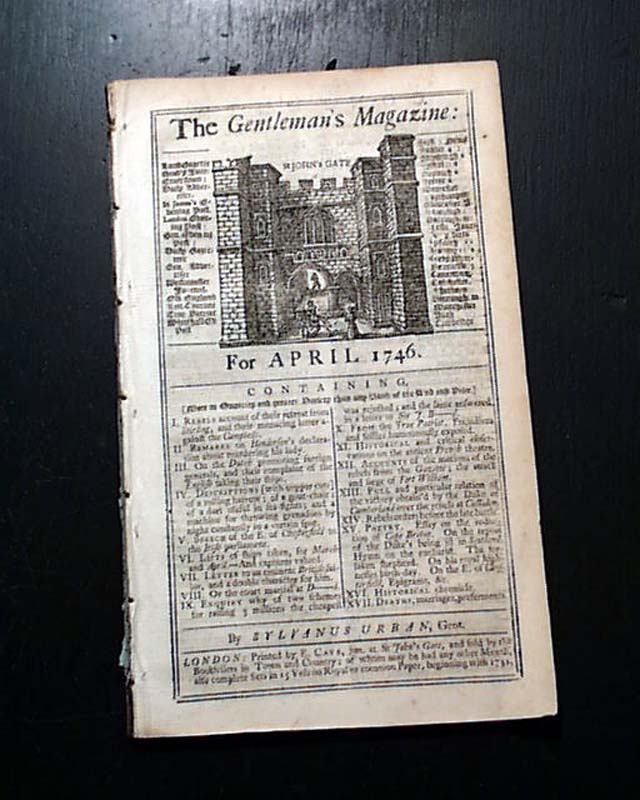