Home > Back to Search Results > Accusations of manipulating the news... Naval events in the war...
Click image to enlarge 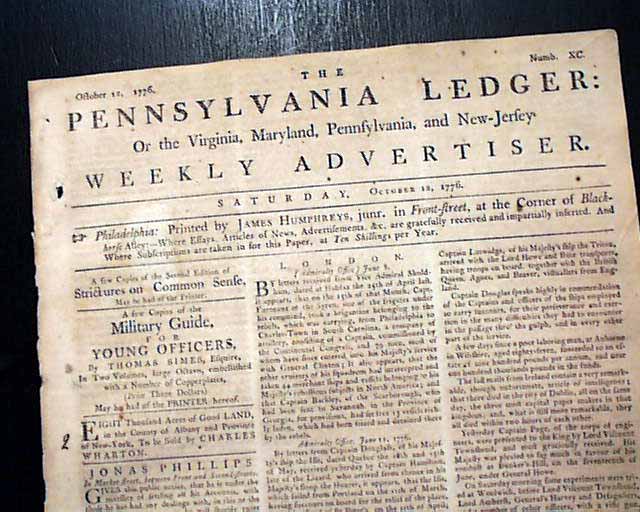 Accusations of manipulating the news... Naval events in the war...

This was a decidedly Tory newspaper, supportive of the British efforts in America. This newspaper ended publication in June, 1778 when the British evacuated the city.
The front page has a legal notice concerning a naval court case brought by John Barre, commander of the brigantine Lexington, against: "...James & Joshua, Negro slaves, lately taken on board the prize sloop called the Edward...". The ftpg. also has a full column report from the Admiralty office in London concerning a wide variety of naval news reports from America (see). Also a brief item noting: "...His Majesty was pleased to say much in favour of his conduct at Bunker's Hill on the 17th of June, under General Howe."
Page 3 has a few items relating to the Revolutionary War including a note that: "Three frigates & three tenders passed Mount Washington the 9th of October...Lord Sterling is exchanged for Gov. Browne of Providence, and Master Lovell for Major Skeene.." Mention is made that: "An embargo being laid on the shipping in Jamaica on account of the insurrection among the Negroes for want of provisions...". There is an interesting item about the manipulation of the news, mentioning: "It is astonishing to see daily the insults offered by the Tories...since the news of the skirmish on Long Island; on the first report...congratulate each other...They have the effrontery to assert that it is much worse than reported, that it's so bad that the Sons of Liberty are afraid to let it be known least the people should be discouraged. Is not this intolerable?...they propagate every intelligence they receive, taking care to calculate it so as to serve their own turn; its beyond a matter of doubt that they keep up a secret correspondence through the colonies in order to comfort one another to keep up their sinking spirits and to propagate falsehoods...".
Four pages, numeric notations in margins next to ads (this was the editor's copy), small piece from a lower back leaf corner affects only ads, generally very nice condition.