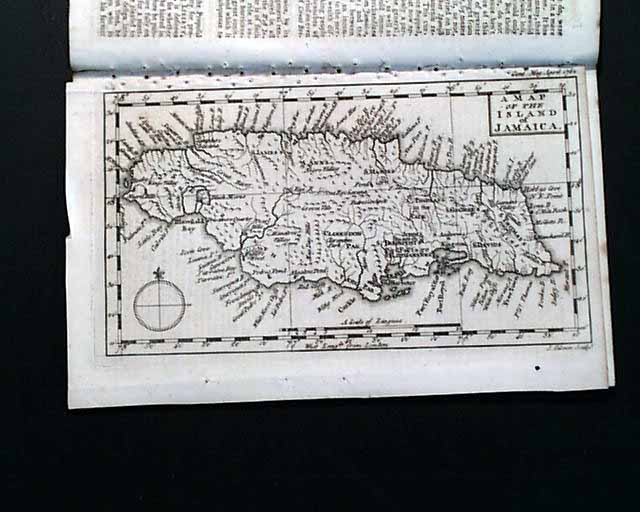 Item # 666213 THE GENTLEMAN'S MAGAZINE, London, April, 1762  This magazine still has the full page plate of "A Map Of the Island of Jamaica" which shows much detail. This map measures 5 by 8 inches and has tiny binding holes above the top margin, not touching the map. There is also a report which relates to it titled: "Weak State of the Island of Jamaica".
There is also another article which begins: "Porto Rico is a large Spanish island, well fortified; and Hispaniola belonging to both France & Spain is much larger & stronger...by taking the Havannah & St. Jago, we shall take the whole island of Cuba which is 500 miles long...And as our taking Cuba and Florida, will bring Spain to reasonable terms, the taking Mississippi & the Caribee Islands, which we have already conquered, may bring France to reasonable terms also..." with more.
There is also an interesting report concerning the trial of seven men for piracy.
The other plate called for is lacking.
Complete in 48 pages, 5 by 8 inches, full title/contents page featuring an engraving of St. John's Gate, tiny binding holes at the blank spine margin. There are a few library stamps in the bottom margins of some leaves. Nice condition.