Home > Back to Search Results > The Mormon War...
Click image to enlarge 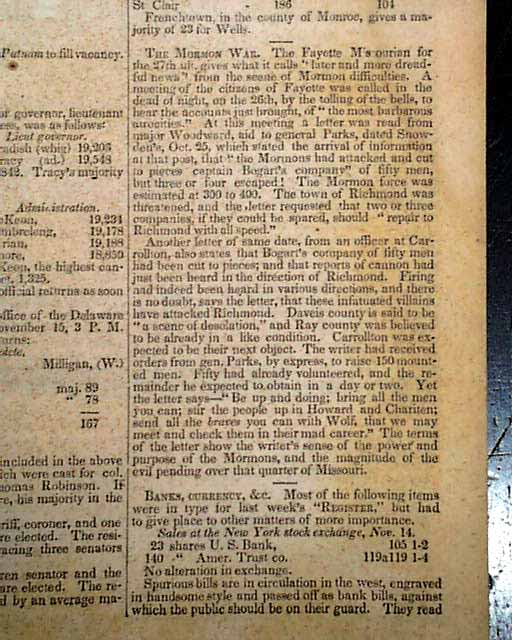 NILES' NATIONAL REGISTER, Washington City, Nov. 17, 1838  The front page has a very nice item headed: "The Mormon War" portions of which include: "...from the scene of the Mormon difficulties. A meeting of the citizens of Fayette was called...to hear the accounts just brought of 'the most barbarous atrocities'. ..a letter was read from Major Woodward...Oct.25 which stated the arrival of information at the post that the Mormons had attacked and cut  to pieces captain Bogart's company of 50 men but three or four escaped! The Mormon force was estimated at 300 to 400. The town of Richmond was threatened...reports of cannon had just been heard in the direction of Richmond. Firing had indeed been heard in various directions....Davis county is said to be a scene of desolation & Ray county we believe to be already in a like condition. Carrollton was expected to be their next object...terms of the letter show the writer's sense of the power & purpose of the Mormons and the magnitude of the evil pending over that quarter of Missouri." and much more.
Sixteen pages, 9 by 12 inches, various toning, good condition.