Home > Back to Search Results > Mormon troubles in Missouri...
Click image to enlarge 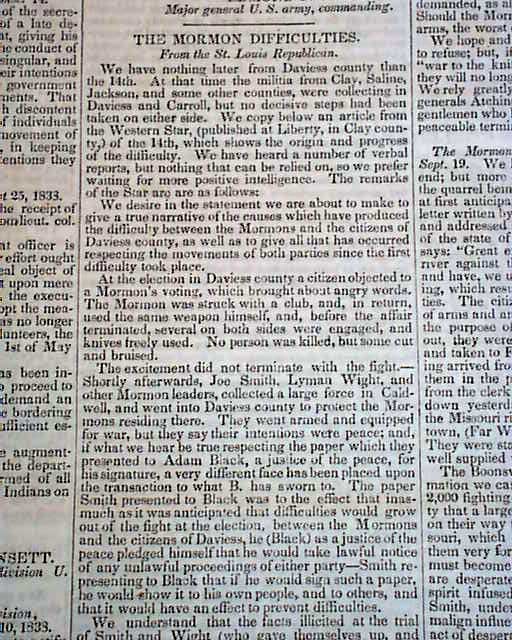 Page 3 has a rather lengthy article taking close to two-thirds of the page headed: "The Mormon Difficulties" with a few portions including: "...a citizen objected to a Mormon's voting which brought about angry words. The Mormon was struck with a club...the excitement did not terminate with the fight. Shortly afterwards, Joe Smith, Lyman Wight and other Mormon leaders collected a large force in Caldwell & went into Davies county to protect the Mormons residing there...We understand that the facts elicited at the trial of Smith and Wight, who gave themselves up & were heard before the judge of our circuit court last week, completely stamped the certificate of Black, Comstock and others with falsehood..." with so much more.
Another article: "The Mormons" begins: "We had hoped that this difficulty was at an end but more recent intelligence leaves no doubt of the quarrel being of a more serious character than was at first anticipated...great excitement prevails the other side of the river against the Mormons--they are all up in arms...the Mormons are from 1500 to 2000 fighting men...the governor has also ordered out the Boonville Guards to be in readiness...the only object of the commander-in-chief seems to be to prevent the shedding of blood & restore order to the community..." and much more.
Sixteen pages, 9 by 12 inches, nice condition.