Home > Back to Search Results > Details on the British military in America...
Click image to enlarge 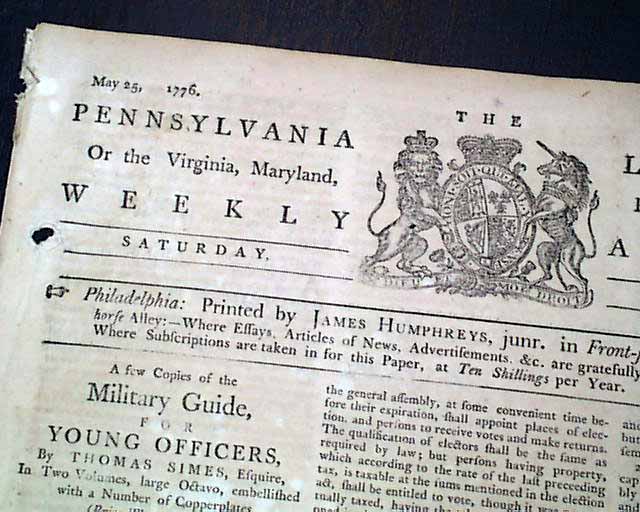 This was a decidedly Tory newspaper, supportive of the British efforts in America. This newspaper ended publication in June, 1778 when the British evacuated the city.
The front page is taken up with the conclusion of the "Constitution of South Carolina". A page 2 article begins: "George Merchant, a private...rifleman from Virginia, who went to Canada with Col. Arnold last fall, was taken prisoner with 2 Indians and a New England soldier...". Another items begins: "Lord Howe is appointed commander in chief of the fleet...Lord Cornwallis is now ready to sail from Cork with 3000 men for Virginia to meet General Clinton The plan is to march through that colony and attack Philadelphia by land...Burgoyne is to retake Canada with 10,000 men..." with more on military strategy.
Page 2 also has a great list showing the: "Corps In America and Under Orders for the Continent, January 1776" showing the commanders and where the troops are. Some very good text regarding this as well. Page 2 begins with: "The Protest of Divers of the Inhabitants of this Province...". Much more on this on page 3. Also a note: "Thursday afternoon, about 2 o'clock, His Excellency General Washington arrived in this city from New York."
The back page has a detailed ad offering a $16 reward for four deserted soldiers. Four pages, close-trimmed at the bottom of pg. 2 causes loss to the bottom line, numeric notations next to ads (this was the editor's copy), nice condition.