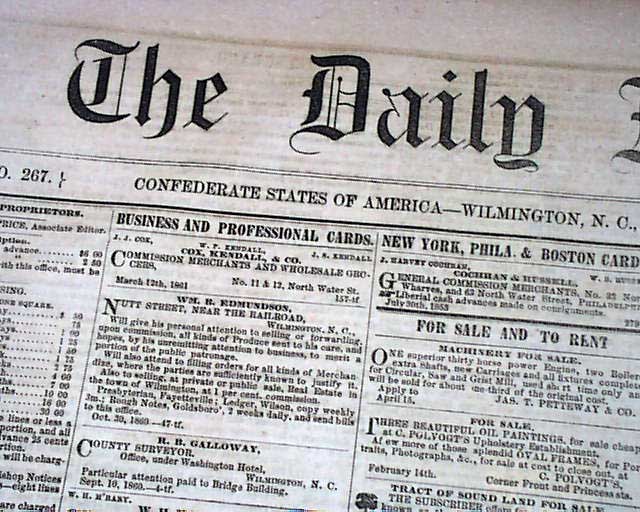 THE DAILY JOURNAL, Wilmington, North Carolina, July 20, 1861  This is one of just a few newspapers which printed "Confederate States Of America" in the dateline. The front page is entirely taken up with ads.
War related items are on page 2 include: "Official Report of the Battle at Bull's Run Creek" "Further From the Manassas Fight" "Federal Report of the Battle at Manassas" "Loan For the Defence of the Confederate States".
Also a fascinating editorial: "The Atrocious Message of President Lincoln" which begins: "The unscrupulous Chief Magistrate who presides over the destinies of the United States has fairly convicted himself, out of his own mouth & by his own avowals, of the worst crimes of which he accuses his Southern enemies..." and much more.
Four pages, very nice condition.
Note: Wilmington was a major Atlantic Ocean port city for the Confederacy during the Civil War, and was one of the last ports to fall to Union forces in 1865. It ranked equal in size to Atlanta according to the 1860 census, and was a major point of entry for supplies for the entire Confederacy, exporting cotton & tobacco in exchange for munitions, clothing & food. As such it was barricaded by Union forces during the war, but blockade runners had some success in getting supplies through. It is just 170 miles north of Charleston, where the Civil War began.