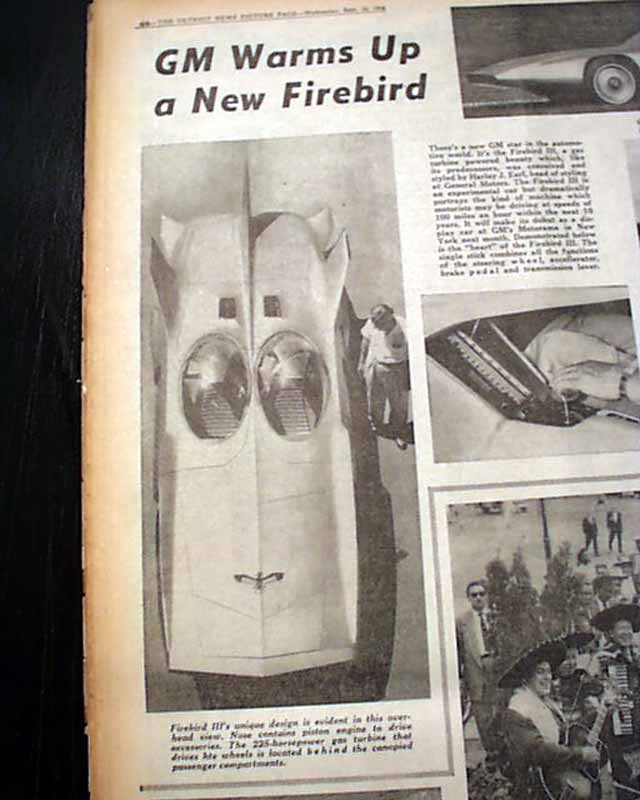 The back page has four related photos of the new GM Firebird III concept car with heading: "GM Warms Up a New Firebird" and some text. I'm sure that only a Detroit publication would cover this. Rare as such.
Complete with all 68 pages, light toning at the margins, binding holes along the spine, small library stamp within the masthead, generally in good condition.


wikipedia notes: The second concept car, the Firebird II of 1956, was a more practical design: a four-seat, family car. It is a low and wide design with two large air intakes at the front, a high bubble canopy top, and a vertical tail fin. Its exterior bodywork is made entirely of titanium (which turned out to be hard to make). The engine output is 200 hp (150 kW). To solve its exhaust heat problem, the car feeds the exhaust through a regenerative system, which allows the entire engine to operate nearly 1,000 degrees. Kerosene was the most common fuel used. Another innovation on the car is the first use of disc brakes on all four wheels, along with a fully independent suspension. It also featured a sophisticated guidance system intended for use with "the highway of the future," where an electrical wire embedded in the roadway would send signals that would help guide future cars and avoid accidents. It appears in GM's sponsored-film short "Design for Dreaming".