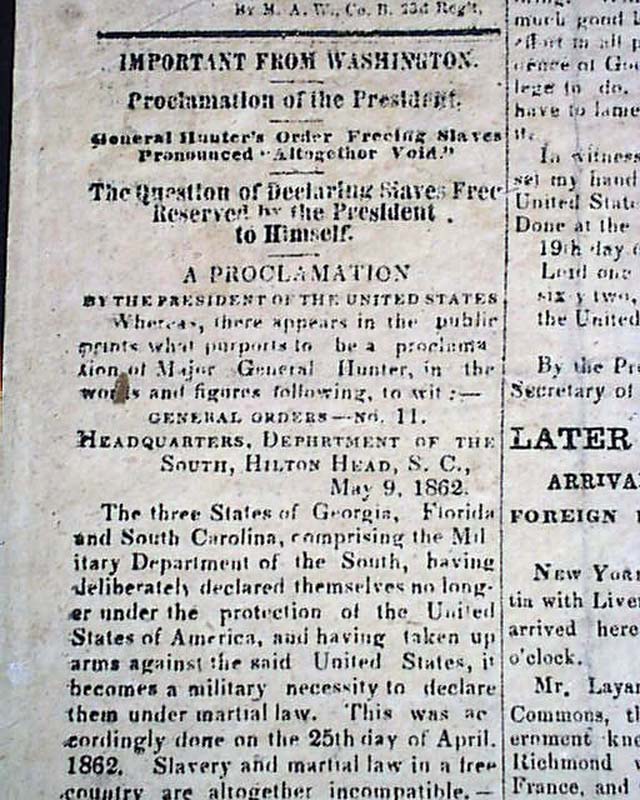 This is certainly one of the more rare newspapers from this Confederate state. It began in 1848 but ceased publication in 1862. Its editor, James Hunnicut, was a minister of a Free Will 'Union' congregation, was considered to be quite eccentric. As the war neared he became an outspoken Unionist and locals forced him to shut down the paper due to his pro-Union editorials. With the arrival of Union forces in May, 1862 he resumed publication (renumbered), but with the Union evacuation in August he was again put out of business, this time for good.
This issue has a wealth of fine war-related content, most significantly front page content on the General Hunter emancipation controversy. The first column has heads: "Proclamation of the President" "General Hunter's Order Freeing Slaves Pronounced 'Altogether Void' " "The Question of Declaring Slaves Free Reserved by the President to Himself".
This is followed by the text of Hunter's original order declaring the slaves in Georgia, South Carolina and Florida free, followed by President Abraham Lincoln's response signed in type: Abraham Lincoln. This was a controversial situation whereby Hunter declared his own emancipation proclamation previous to Lincoln's Emancipation Proclamation from four months later.
The balance of the issue is mostly taken up with war-related reports as well as a lengthy and excellent page 2 editorial: "Submission".
This is the volume 1, number 3 issue. Four pages printed on wrapper paper-like stock with a brown tint, some dirtiness to a quadrant on the ftpg., otherwise quite nice.