Home > Back to Search Results > Rare plate of the execution of Admiral Byng...
Click image to enlarge 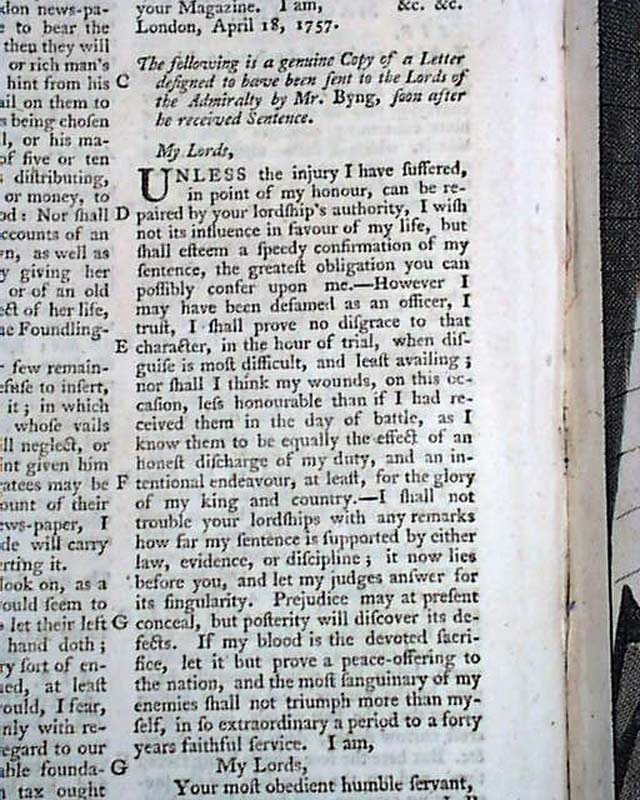 Rare plate of the execution of Admiral Byng...


THE LONDON MAGAZINE, England, April, 1757  Certainly the prime content is the quite rare full page print titled: "The Shooting of Admiral Byng on Board the Monarque" as such prints were more typically removed years ago. This is a dramatic engraving & is accompanied by a letter he penned to the Lords of the Admiralty upon receiving his death sentence.
Admiral John Byng was a Royal Navy officer who was notoriously court-martialed and executed by firing squad for failing to relieve a besieged British garrison during the Battle of Minorca. He was found guilty of failing to "do his utmost" to prevent Minorca falling to the French. He was sentenced to death and, after pleas for clemency were denied, was shot dead by a firing squad on 14 March 1757.
This issue also has a continued article: "Account of the British Plantations in America".
Complete in 56 pages, great full title/contents page featuring an engraving of the skyline of London, 5 by 8 1/4 inches, very nice condition.