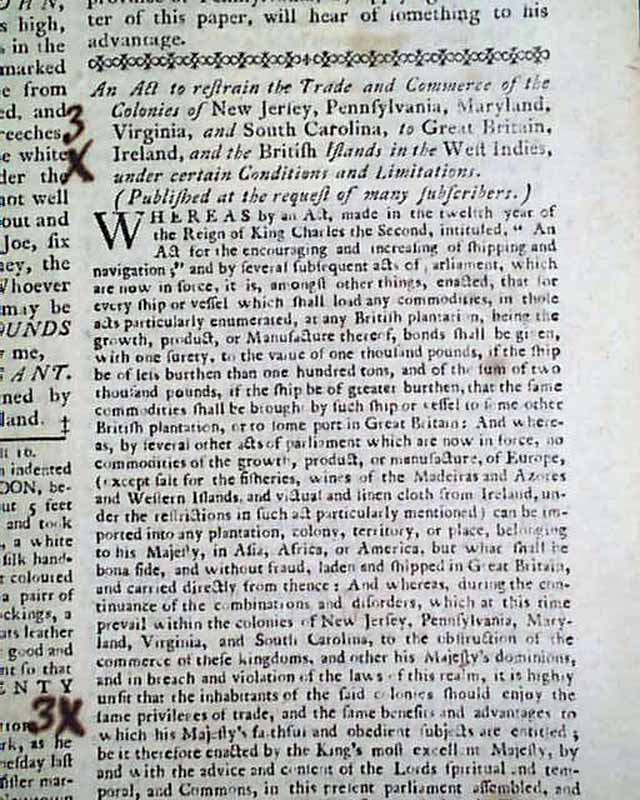 Taking nearly one-third of the front page  and most of page 2 is the extension of the very historic New England Restraining Act by Parliament. This was the King's response to the American colonies' decision to boycott British goods. The Act provided that New England's trade be limited to Britain and the British West Indies, trade with other nations prohibited effective July 1, 1775. In April 1775, after news was received in London that colonies outside of New England had joined the Continental Association, a second restraining Act was passed to include the colonies of Pennsylvania, New Jersey, Virginia, Maryland and South Carolina. New York, Delaware, North Carolina, and Georgia were not included because the North ministry mistakenly believed that those colonies were opposed to the colonial boycott.
The very lengthy document in this newspaper was the revised "Extended" document to include colonies outside of New England (see list of colonies in photos).
There is other war-related content in this issue as well in addition to a report of the marriage of John Hancock: "Last evening was married...The Honorable JOHN HANCOCK, Esq. President of the Continental Congress to Miss DOROTHY QUINCY, Daughter of EDMUND QUINCY, Esq. of Boston." Another report notes: "...The above Indians came hither to offer their service in the cause of American Liberty, have been kindly received & are now enter'd the service...". Much more concerning Indians involved in the Revolutionary War (see for portions).
There is also a great document from the: "Association of the Freemen of Maryland" which notes in part: "The long, premeditated, and now, avowed design of the British government to raise a revenue from the property of the colonists without their consent...We therefore, inhabitants of the province of Maryland, firmly persuaded that it is necessary & justifiable to repel force by force, do approve of the opposition by arms to the British troops..." with much more. Yet another report from Charleston begins: "Every thing here is suspended but warlike preparations. It is said that there are scarce 200 men in town not enrolled. The country is unanimous--our 2 regiments of foot are every day training..." with more on preparations for war. More good content on the back page as well.
Four pages, light water staining to the bottom portions, some numeric notations in margins next to ads (this was the editor's copy), very nice condition.