Home > Back to Search Results > On Saratoga and so much more...
Click image to enlarge 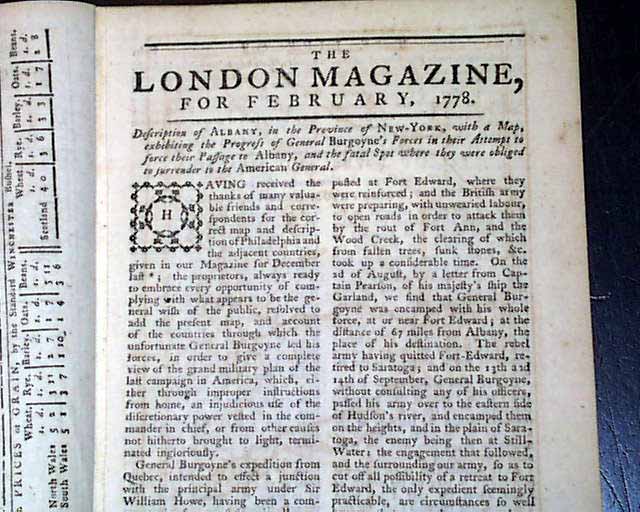 On Saratoga and so much more...


THE LONDON MAGAZINE, England, February, 1778  The entire front page (and a bit of pg. 2) is taken up with: "Description of Albany in the Province of New York, with a Map Exhibiting the Progress of General Burgoyne's  Forces in their Attempt to Force  their Passage to Albany, and the Fatal Spot where They Were Obliged to Surrender  to the American General".
The referenced map is lacking, but the text is very good nonetheless.
Over a full page has an: "American State Paper" being a resolve from Congress dated December 30, 1776. It deals with sending ambassadors to various European powers, and mentions a possible agreement of alliance with France. Signed in type by Charles Thompson and John Hancock.
Near the back ia a review of a book: "A Letter to Benjamin Franklin, LL.D & F.R.S In which his Pretensions to the Title of Natural Philosopher are Considered". Also over a full page on "American Affairs" with various war reports: "The rebels confess to have lost 300 militia dead on the field in the skirmish near White March..." and: "...we learn that Mr. Robert Morris  had actually left the Congress in disgust, having made a motion for rescinding independency, it proved through the art & cunning of the Lees ad Adams, or no effect..." and: "...we learn that Fort Independence was taken on Monday last by the troops under major general Putnam...with very little loss on our side; and that an attack was to be made on New York the next day..." and much more.
Both plates called for are lacking.
Complete in 48 pages, 5 by 8 inches, very nice condition.