Home > Back to Search Results > Attack by the Regulators of North Carolina...
Click image to enlarge 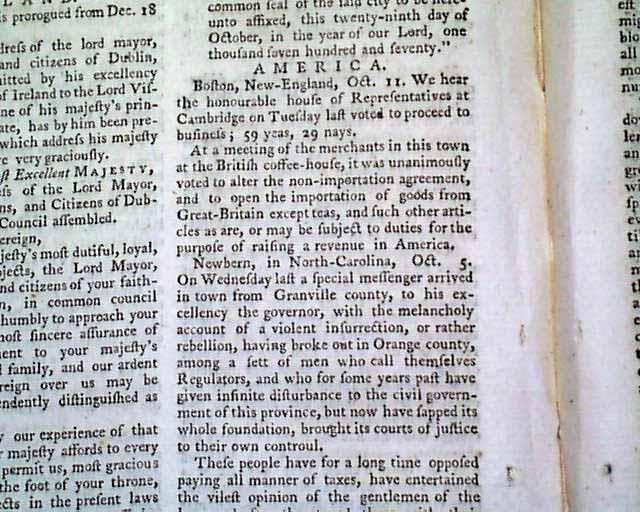 Attack by the Regulators of North Carolina...


THE LONDON MAGAZINE, England, December and the "Appendix" issue for the year of 1770   Near the back are 1 1/2 pages headed: "America" with a report from Boston concerning the non-importation agreement.
The lengthier & more detailed report is that of the storming of the court house in Hillsborough, North Carolina, by the Regulators and their attacks upon John Williams and Col. fanning.
An interesting feature is the full title/contents page which has a very intricately engraved view of the skyline of London at the time, making this very decorative.
Included as well is the "Appendix" issue for the year 1770. It includes a 3 page article detailing the: "Present State of the British Trade with Europe, Africa, and America".
One of the 2 plates called for is present, being a political cartoon.
Complete in 90 pages including the Appendix issue. Also included is the index for the year. Measures 5 by 8 inches, excellent condition.