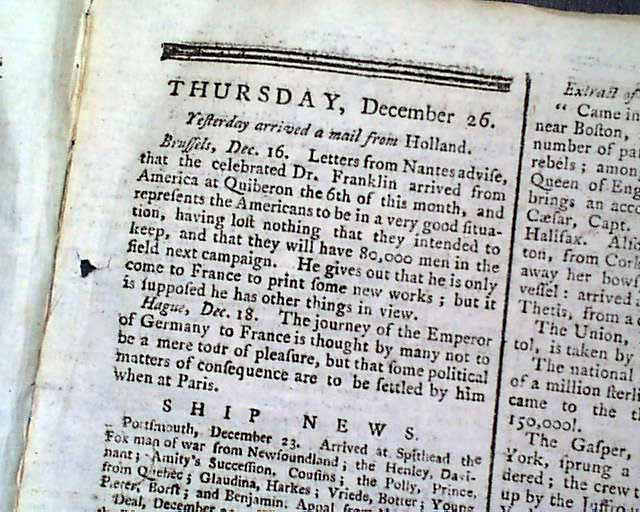 
THE LONDON EVENING POST, England, Dec. 26, 1776  Page 3 begins with a report noting: "...the celebrated Dr. Franklin arrived from America at Quiberon...and represents the Americans to be in a very good situation, having lost nothing, that they intended to keep, and that they will have 80,000 men in the field next campaign. He gives out that he is only come to France to print some new works; but it is supposed he has other things in view." And so he did! Within 13 months he would consummate a treaty of assistance with France which would help America win the war.
The back page has fine content on the situation in America, beginning with over a full column letter with commentary on the situation in America, including much on General Washington and his efforts above Manhattan, and much more.
Also on the bkpg: "Some Thoughts on the Controversy About the Supremacy of Parliament" which relates in part to America. And another article begins: "No person disputes...but Washington has out-general'd Howe; he has made a most noble and soldier-like retreat with his whole army, unhurt. The climate is so severe, that the King's forces can do no more till April or May. In these last attacks, it has cost Howe, or rather this nation, near 500 brave men to gain a tract of open, barren land..." with more.
Four pages, never-trimmed margins, red tax stamp on page 3, some ink marks on the front page only, very nice condition.