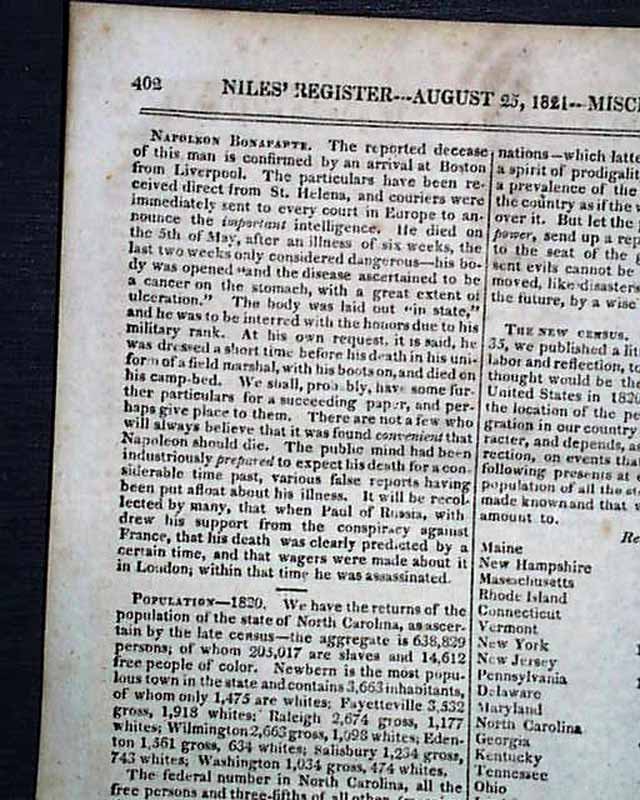 
NILES' WEEKLY REGISTER, Baltimore, Aug. 25, 1821  The top of page 2 has a report with small head: "Napoleon Bonaparte"  which begins: "The reported decease of this man is confirmed by an arrival at Boston from Liverpool. The particulars have been received direct from St. Helena...He died on the 5th of May after an illness of six weeks, the last two weeks only considered dangerous..." with more.
Further on is a report from Pensacola headed: "Florida" which includes: "Yesterday, after a series of delay, and disappointments, of a piece with the whole tenor our 20 years' negociations with Spain, the American authorities were finally & formally put in possession of this city..." with much more, taking over a full page of detailed text (photos show only the beginning) and includes a document signed by Andrew Jackson and Jose Callava.
Other reports include: "New Census" with a count by state; "Copper Coins" of the United States; "Trade with Norway" "African Colonization" and over half a page on: "Introduction of Slaves" which concerning the importation of slaves contrary to the laws of the United States.
Sixteen pages, 6 by 9 1/2 inches with lite scattered foxing, otherwise is in very good condition.