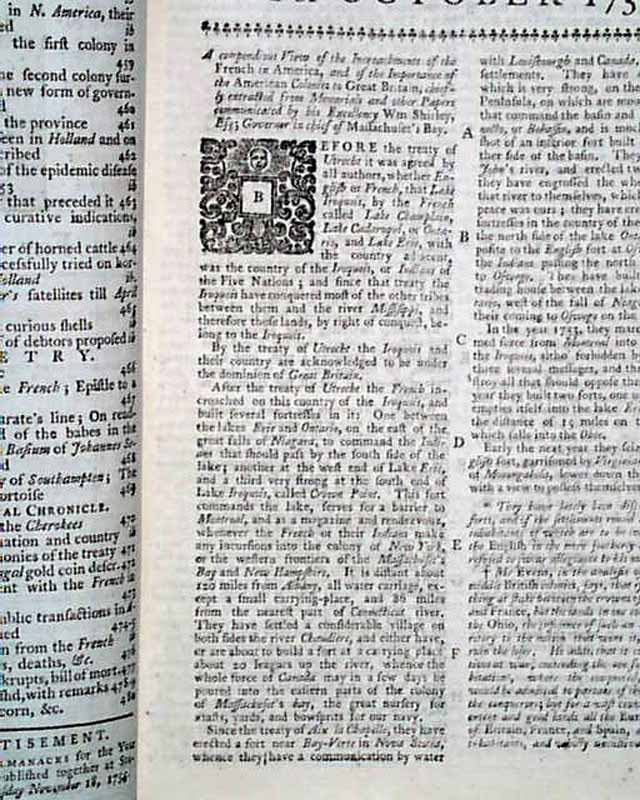 Item # 657793 GENTLEMAN'S MAGAZINE, London, October, 1755  The first article is: "A Compendious View of the Encroachments of the French in America, & of the Importance of the American Colonies to Great Britain..." which takes over 3 pages chronicling events of the war & mentioning that in 1754: "...a body of 1100 French and Indians attacked Major Washington, commander of the Virginia forces who had then with him only 300 men, and obliged him to surrender upon article of capitulation...". This is a very early mention of Washington and the surrender of Fort Necessity. Washington was just 23 years old at the time. He participate as a volunteer aide in the ill-fated expedition of General Braddock where he distinguished himself in the retreat following the climatic Battle of Monongahela.  (see photos for portions).
Another article begins: "An Answer to several queries concerning an electrical experiment made with a kite. by Dr. Lining of South Carolina" and part of the text explains how it works & includes: "...this account seems to contradict Mr. Franklin, who says, 'at whatever distance you see the light you may draw off all the electrical fire...".
Also in the issue is: "Account of British America--Account of the first Settlement of Virginia" being a continued article (see for portions) & taking over 3 pages
In the "Historical Chronicle" near the back of the issue is a lengthy report datelined: "Charles Town in America" [Charleston] with much about the Indians, taking over 2 pages.
There is also much on the French & Indian War including a letter from "Camp at Lake St. George, Sept. 9, 1755" with some nice text on the Battle of Lake George, and "Journal of the War in America". (see for portions)
Both plates called for are present.
Complete in 48 pages, 5 1/4 by 8 inches, full title/contents page featuring an engraving of St. John's Gate, very good condition.