Home > Back to Search Results > Murder of Indians in Pennsylvania...
Click image to enlarge 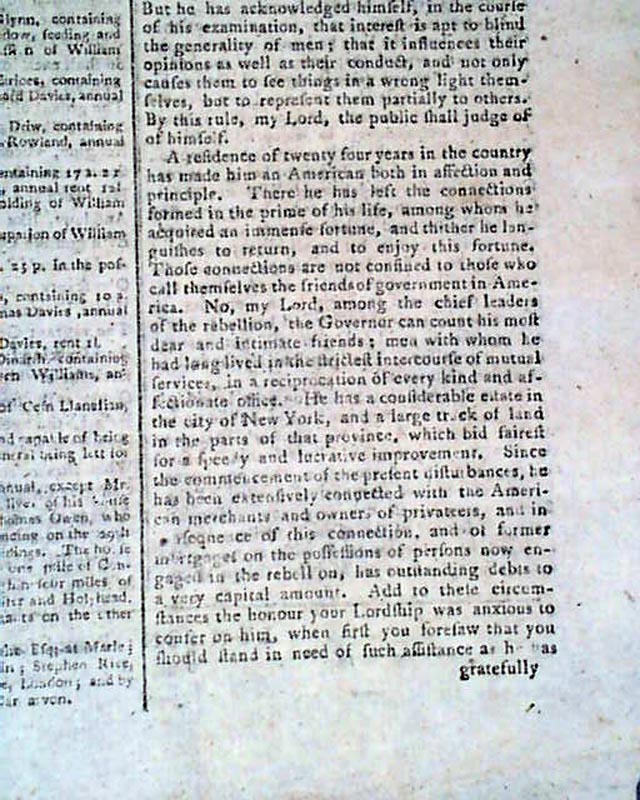 Murder of Indians in Pennsylvania...

(currently spelled Gloucester)  The ftpg. has a letter from Philadelphia which includes: "...relative to the late murders committed on ten Indians...as the perpetrators of those  horrid barbarities have been rescued from prison since this talk was transmitted, it is much doubted whether a reconciliation will take place."
Then a letter has: "Brothers of the six nations Delawares, and other inhabitants of the west branch of Susquehanna, hear what I have to say to you...that Frederick Stump and John Ironcutter have unadvisedly murdered ten of ours Indians near Fort Augusta..." with further details.
Page 3 has a dateline from Charleston with news concerning import duties, and a letter from an Indian chief living: "...at the Great Island in the west branch of Susquehanna...".
Four pages, a very nice & decorative masthead featuring engravings on either side. Red tax stamp on the ftpg., nice condition.

wikipedia notes: In January 1768, a 33-year-old German-American settler and his 19-year-old servant, named Frederick Stump and John Ironcutter, were found to be responsible for the deaths of four Native American men, three Native American women, and three children over a two-day period. Four of the men and two of the women were killed at Stump's cabin, which was located at the mouth of the Middle Creek near Selinsgrove, Pennsylvania. After Stump and Ironcutter shoved the bodies through a hole in the ice, they traveled up the creek to Stump's Run (the site of present-day Middleburg, Pennsylvania) to kill the remaining woman and the children. These bodies were thrown into the natives' cabins, and the cabins were burned. Stump and Ironcutter were imprisoned in Carlisle on January 23. Before they could be tried, an armed mob stormed the jail and freed both men on January 29. The men were never re-captured.