Home > "Causes & Necessity of Taking up Arms" plus the last appeal for peace, and the Battle of Bunker Hill...
Click image to enlarge 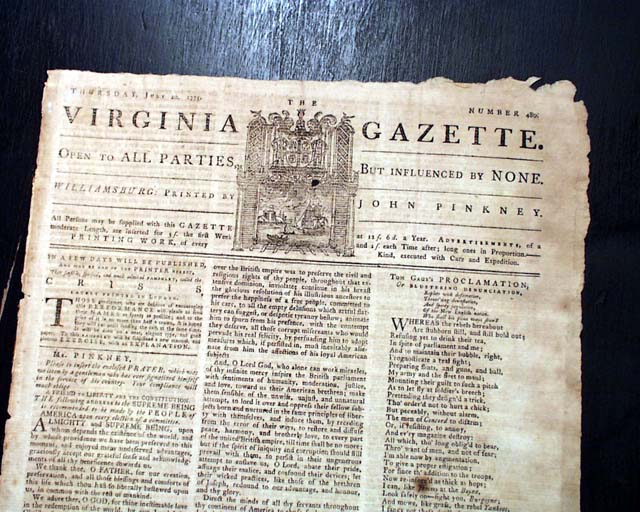 "Causes & Necessity of Taking up Arms" plus the last appeal for peace, and the Battle of Bunker Hill...


THE VIRGINIA GAZETTE, Williamsburg, July 20, 1775  This newspaper was published John Pinkney, a distinction to be made since there were three newspapers of this title printed in Williamsburg during the early period of the Revolutionary War. A very rare opportunity for a scarce title from colonial Virginia with terrific content.
In the world of American Revolutionary literature and manuscripts three bodies of work stand out: 1) Thomas Paine's Common Sense; 2) the Declaration of Independence; and 3) the earliest of the Revolutionary trinity, the Causes and Necessity of Taking Up Arms.
Over one-third of page 2 and over half of page 3 are taken up with this latter document, signed in type at its conclusion by John Hancock.

The heart of the document is in these lines: "...We are reduced to the alternative of choosing an unconditional submission to the tyranny of irritated ministers, or resistance by force. The latter is our choice. We have counted the cost of this contest, and find nothing so dreadful as voluntary slavery….Our cause is just. Our union is perfect. Our internal resources are great, and, if necessary, foreign assistance is undoubtedly attainable…With hearts fortified with these animating reflections, we most solemnly, before God and the world, declare, that, exerting the utmost energy of those powers, which our beneficent Creator hath graciously bestowed upon us, the arms we have been compelled by our enemies to assume, we will, in defiance of every hazard, with unabating firmness and perseverance, employ them for the preservation of our liberties; being with one mind resolved to die freemen rather than to live slaves...".
This document is rarely offered in a period American newspaper, and was, in essence, America's declaration of war against Great Britain, remaining a very desired cornerstone piece in an collection of American newspapers.
Portions of the document are shown in the photos, while the entire text can be seen on the internet.
Also of great significance is the page 3 report prefaced with: "General Gage's false and audacious account of the late battle near Boston, address to the earl of Dunmore." this being an account of the Battle of Bunker Hill. It is datelined "Boston, June 26, 1775" and begins: "This town was alarmed on the 17th instant, at break of day, by a firing from the Lively ship of war, and a report immediately spread that the rebels had broke ground & were raising a battery on the heights of the peninsula of Charlestown, against the town of Boston..." with more (see).
Over half of the front page is taken up with a prayer: "...to the Supreme Being is Recommended to be made by the People of America upon every election of a Committee." which focuses on the current crisis within the American colonies in relation to England. And taking most of a ftpg. column is a great poem headed: "Tom Gage's Proclamation, Or Blustering Denunciation" concerning the crisis in Boston. It begins: "Whereas the rebels hereabout Are stubborn still, and still hold out; Refusing yet to drink their tea, In spite of parliament and me..." and much more.
Over half of page 2 is taken up with a very spirited address headed: "To the Right Honourable, and Honourable, the Members of the BRITISH HOUR of COMMONS" which begins: "I call upon you, in the name of the whole collective body of the people of this nation, to do justice to your injured constituents, for the blood that has been inhumanly shed in the land, for their violated rights, and to redress every grievance they labour under..." with much, much more.
Page 3 has an item from the Provincial Congress at "Watertown, June 26" beginning: "Whereas a number of our inveterate enemies have taken shelter under the protection of general Gage, and his troops...Therefore resolved, that the selectmen & committee of correspondence...be directed to take under their care the effects & estates of the several persons who have fled for protection to Boston or elsewhere...". And another report from Williamsburg reports from the Second Virginia Convention: "...just returned from the convention at Richmond, says that they have resolved to raise, on a regular military establishment, three thousand men at least to defend this colony against the cruel measures of the British ministry..." with a bit more. This was under the prompting of Patrick Henry.
Simply an exceptional newspaper with the "Causes & Necessity...", the Battle of Bunker Hill, and the other fine content detailed. Great to have all this in a Williamsburg newspaper.
Complete in 4 pages, never-trimmed margins, decorative engraving in the masthead, very nice condition. 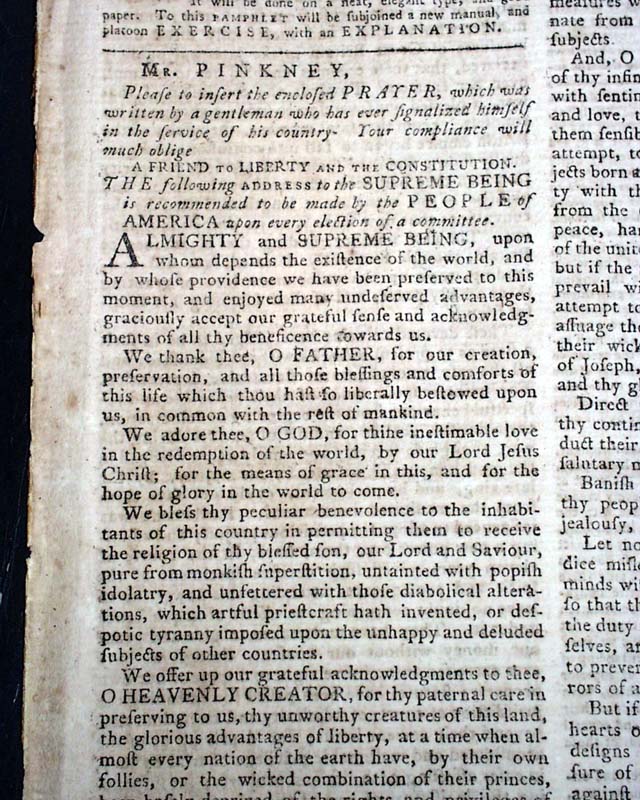 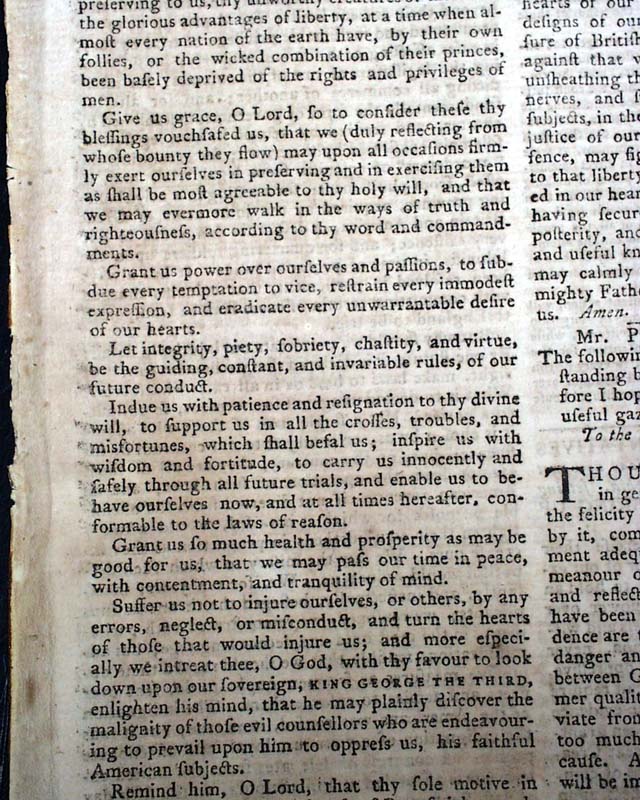 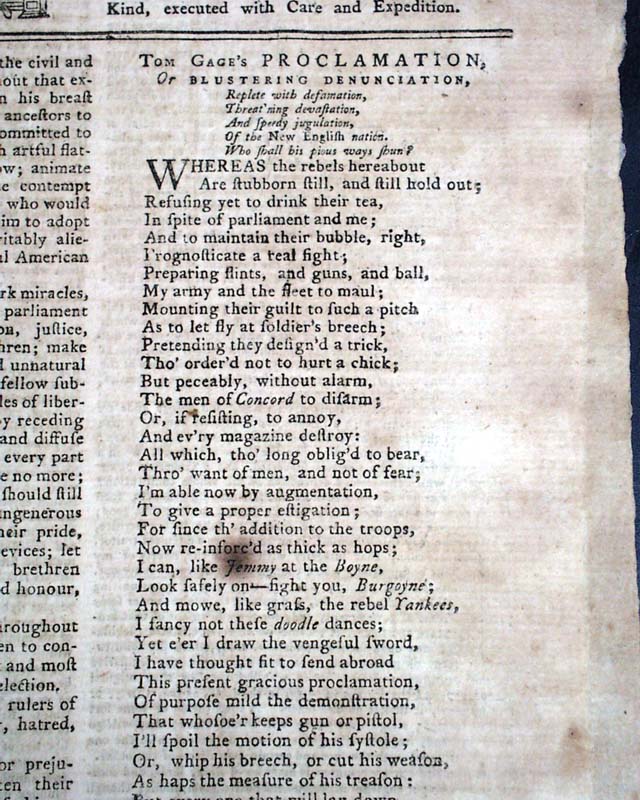 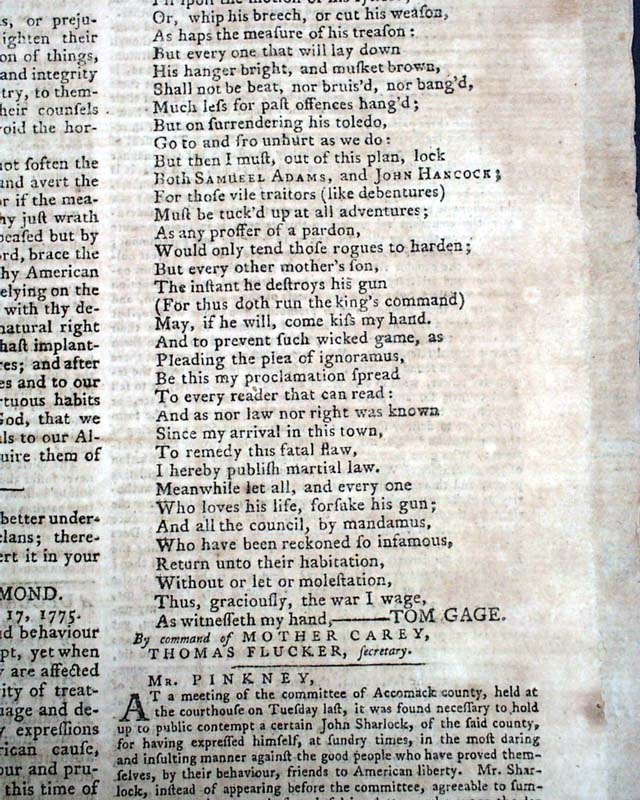 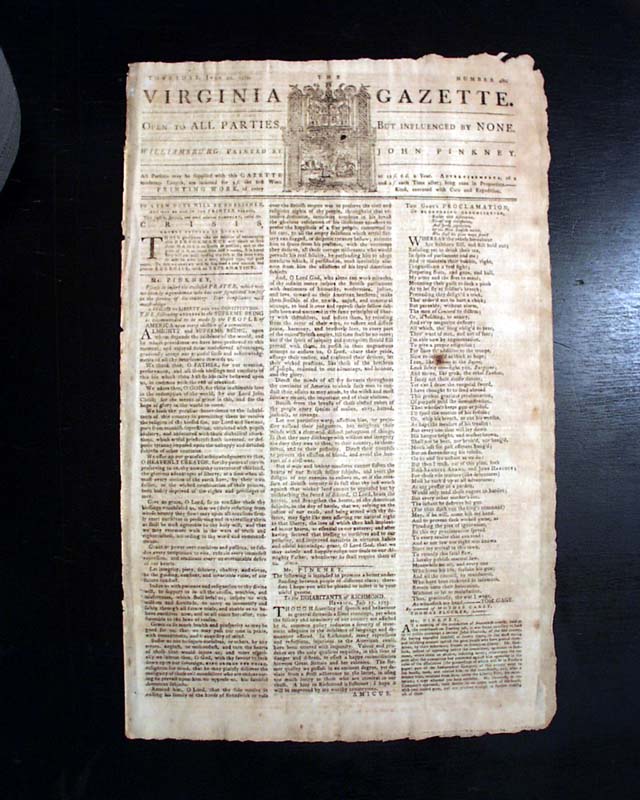 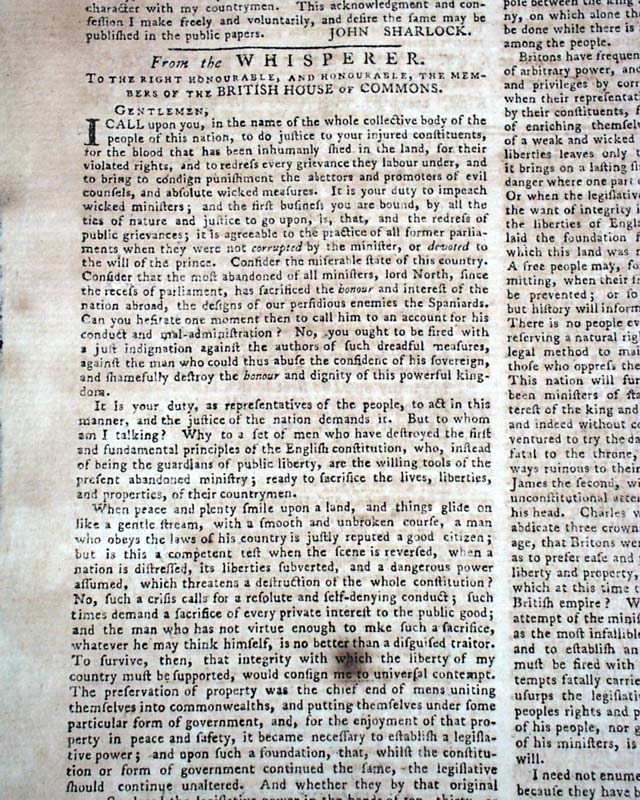 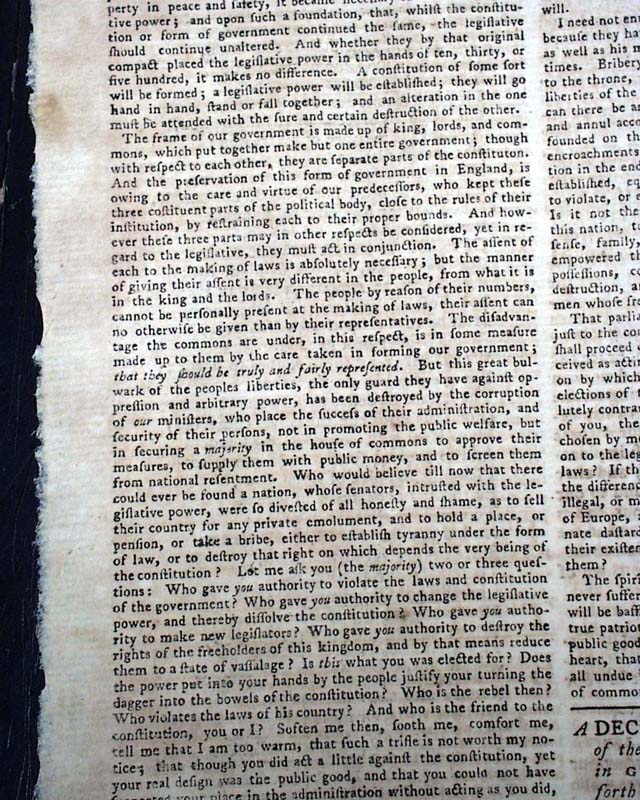 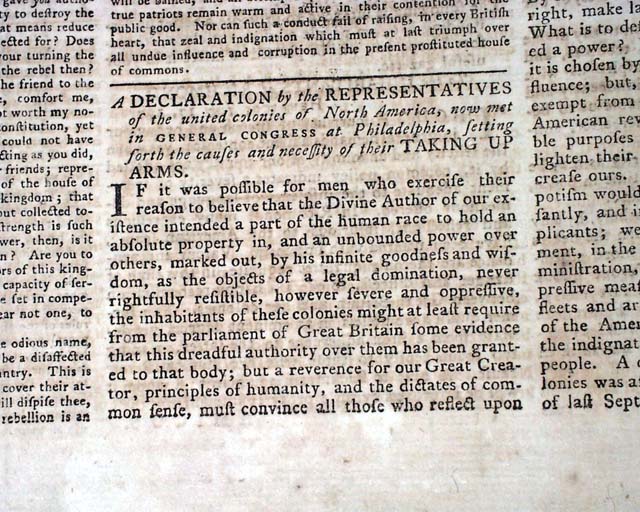 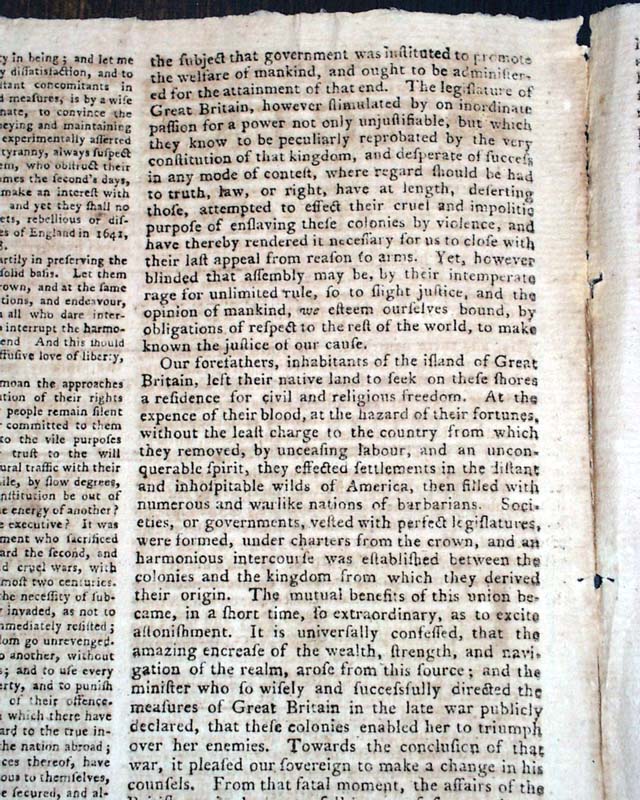 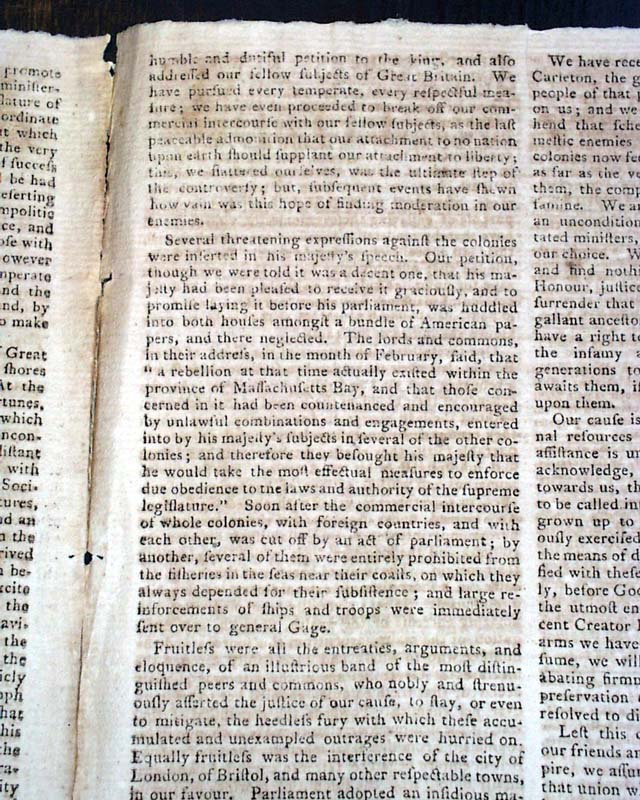 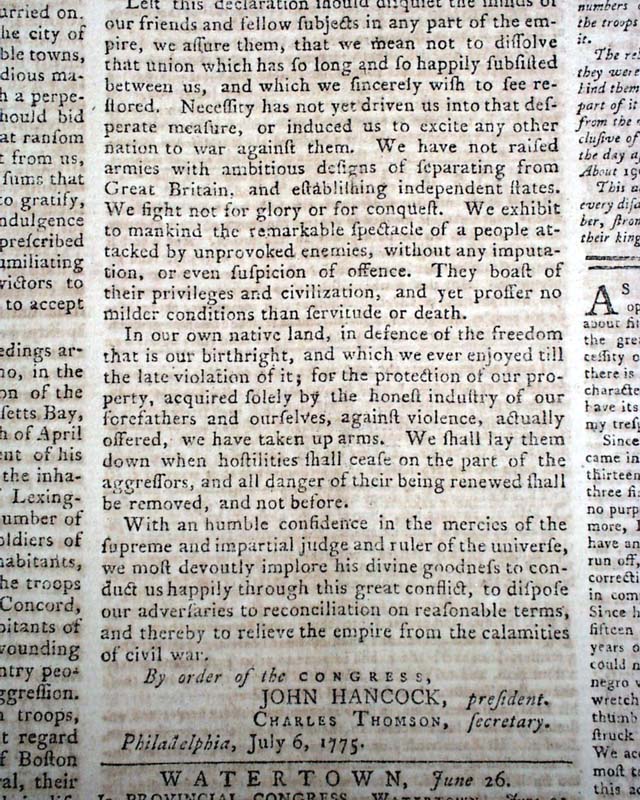 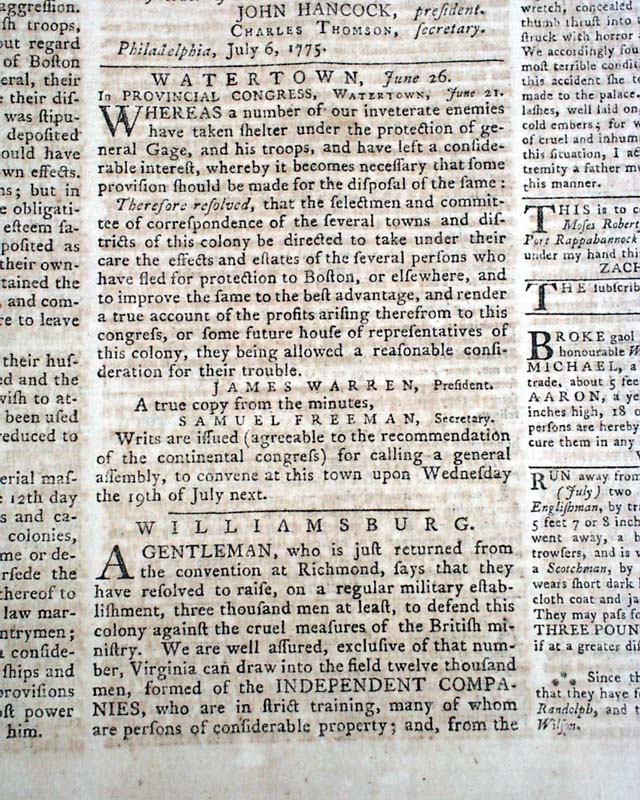 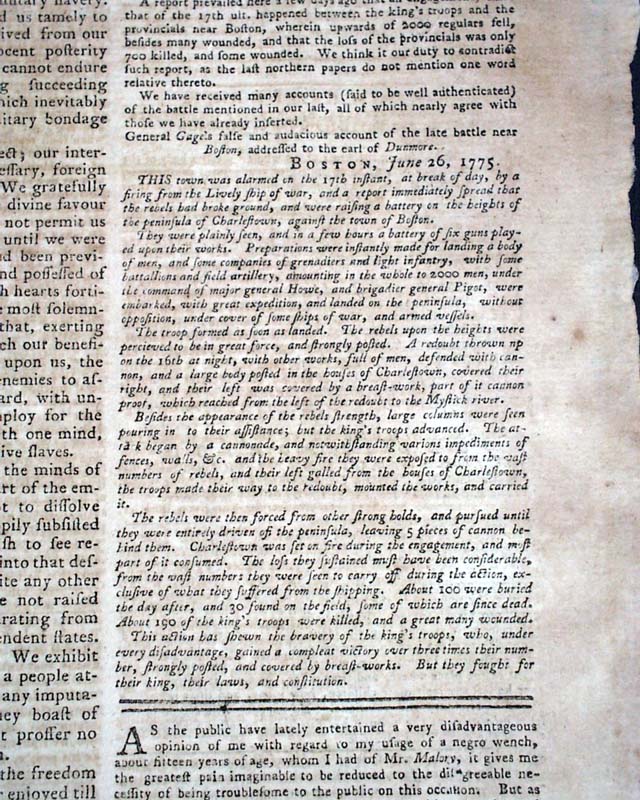 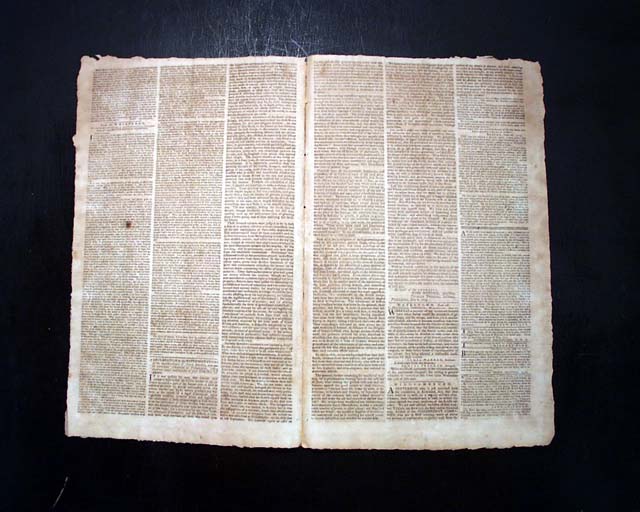 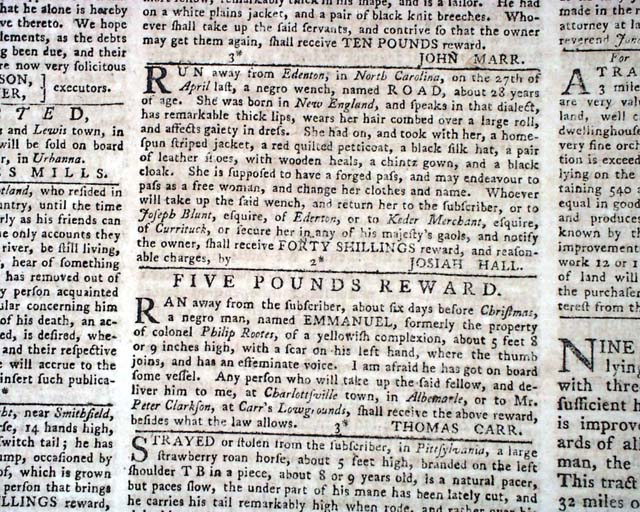 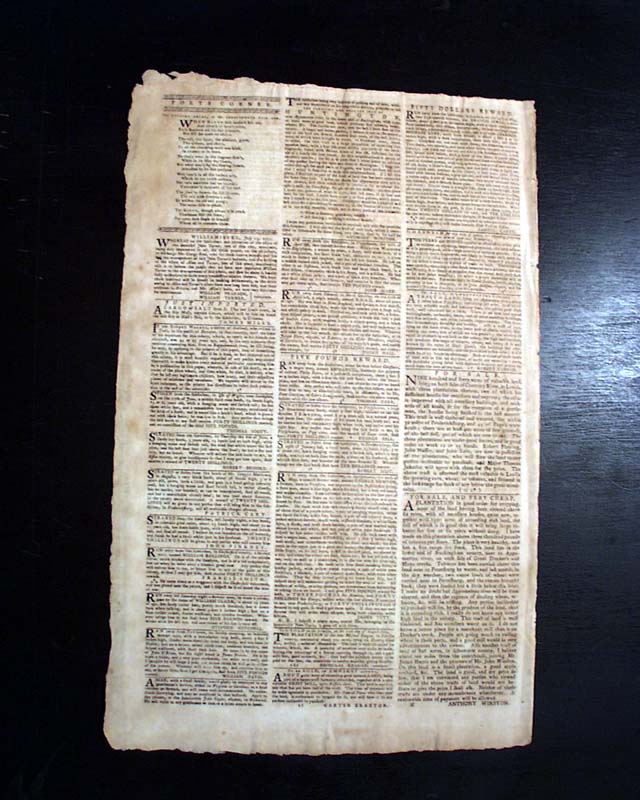