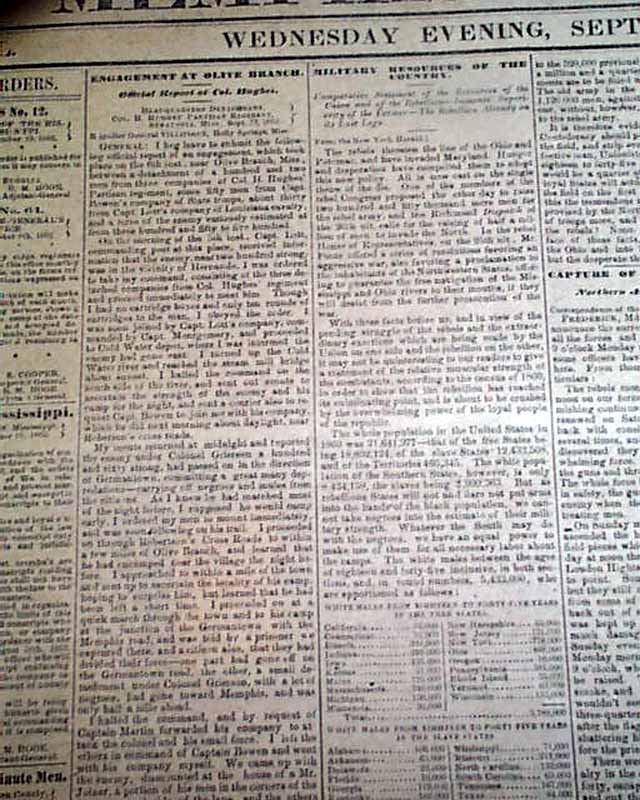 If the title and city of publication seem to be in conflict, they are not. This newspaper had a fascinating history during the Civil War. Memphis was a Confederate stronghold up through the Battle of Memphis on June 6, 1862, at which time the Yankees moved in and it became a Yankee city. Being a strong voice for the Confederacy, the "Memphis Appeal" newspaper would not continue under Yankee control. As Wikipedia notes: "...On June 6, 1862, the presses and plates were loaded into a boxcar and moved to Grenada, Mississippi, where it published for some time. The Appeal later journeyed to Jackson, Mississippi, Meridian, Mississippi, Atlanta, Georgia, and finally Montgomery, Alabama, where the plates were destroyed on April 6, 1865, only days before the Confederate surrender, halting publication of what had been one of the major papers serving the Southern cause." So this one newspaper published in six different Confederate cities during the Civil War.
The front page has: "Engagement at Olive Branch" "Military Resources of the Country" "Capture of Harper's Ferry"  "Northern View of Affairs in Kentucky" and a nice report on Antietam with: "The Battle on Saturday, Sunday & Monday--McClellan's Reception at Frederick".
Page 2 has much more on Antietam with: "Good News From the Potomac" "A Succession Of Confederate Victories!" "The Battle of Wednesday & It's Results!" "The War In Maryland" "Federal Report of the Battles on Sunday Monday and Tuesday" "Great Battle Anticipated on Wednesday". Many other war reports as well.
Nice war-related content in a Confederate "Memphis" newspaper printed in Grenada, Mississippi.
Single sheet, damp staining to the right edge, some foxing, generally nice condition.