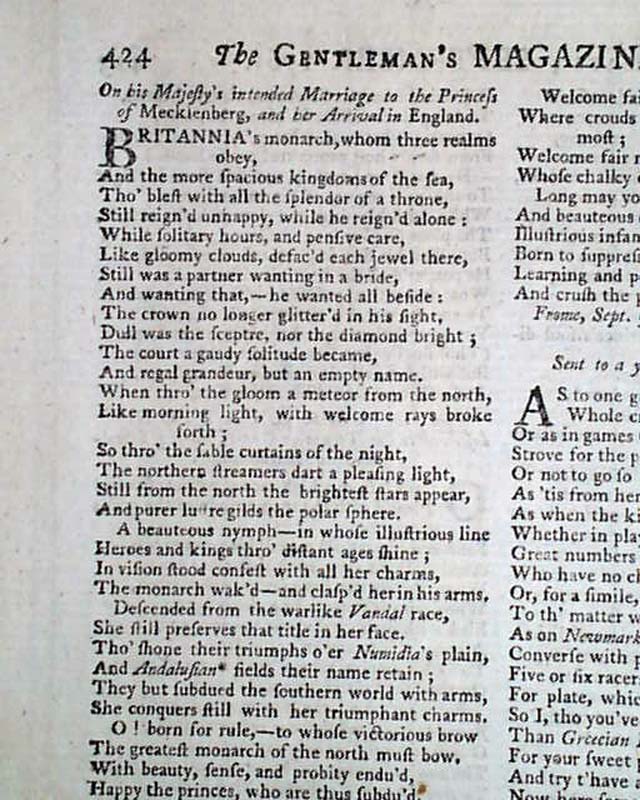 The August issue has: details, songs, and plates related to the marriage and Coronation of William III and Charlotte, Princess Mecklemberg. Also included is a detailed historical account (taking nearly 8 pages) of the Coronation of King James II and Queen Mary, from 1685, which mentions their Coronation being used as the precedent for the coming Coronation. Articles included welcome the soon to be Queen, and mention of her pending arrival. Plates called for include a foldout print showing a representation of the ensuing Coronation Procession, which includes 5 rows of various royalty and others, with the "King & Queen" noted at the beginning, all labeled as to their titles (see images), and a second print showing an exact representation of the Royal Vestments in which the King is crowned. Note: Although called for in the August issue, they are typically either lacking, or present in the September issue.

The September issue has: a great & lengthy report titled: "An Account of the Preparations for the Coronation and for the Reception of the Queen," which is on the historic coronation of King George III.  This report takes 8 pages and includes the: "Procession to the Coronation,"  "Procession of the King and Queen from the Chapel," and another portion headed, "Coronation of His Majesty." Several letters to both King George III and Queen Charlotte are provided, along with their responses. A poem is included as tribute to the intended marriage, along with other related mentions.

Unrelated articles within the August issue include: "Account of the Loss of the Litchfield," "Query, Whether Lightening does not Ripen Corn," "The Case of an Unfortunate Stranger," "...the engagement on the 15th & 16th of July, at the Village of Filingshausen," and more. Near the back is the "Historical Chronicle" which has various news reports of the day which includes two brief mentions of New York and Canada. The entire back page is a chart of: "Each Day's Price of Stocks in August, 1761".

Unrelated articles within the September issue include: "Humorous Piece of Voltaire called a Prophecy," "New Method of Producing Cold by Evaporation," "Success Against the Cherokees," and more. The entire bkpg. is taken up with a chart headed: "Each Day's Price of Stocks in September, 1761".

Both issues are complete in 46 pgs. (each), contain the full title/index page, measure 5 by 8 inches, have never been trimmed, and are in very nice condition.

Note: Although she is not formally recognized as such, research has produced evidence that Queen Charlotte may have been the first Black Royal, of mixed-race descent. A spokesperson for the Monarch was recently quoted as saying, in regards to this possibility: "This has been rumored for years and years. It is a matter of history, and frankly, we've got far more important things to talk about."