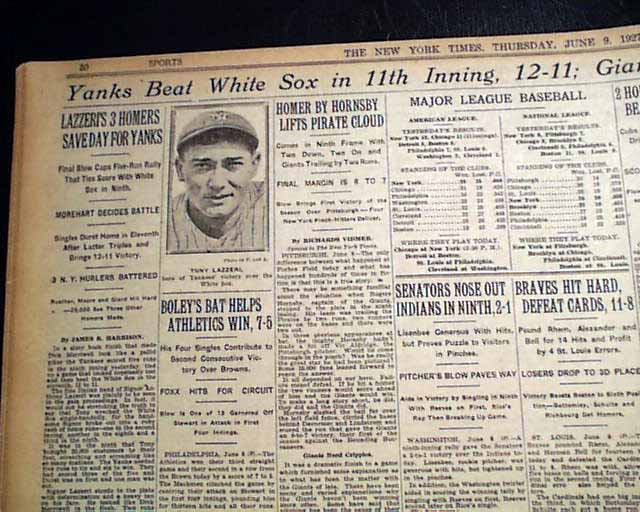 This 56 page newspaper has a five column headline on page 30: "Yanks Beat White Sox in 11th Inning, 12-11" with subheads that include: "LAZZERI'S 3 HOMERS SAVE DAY FOR YANKS" "Final Blow Caps Five-Run Rally That Ties Score With White Sox in Ninth" and more with photo of Lazzeri. (see) First report coverage on Tony Lazzeri becoming the first New York Yankee to hit 3 home runs in one game.
Other news, sports and advertisements of the day with much on the Clarence Chamberlin's Atlantic flight. Light toning a the margins, a few small binding slits along the spine, nice condition.

wikipedia notes: Anthony Michael "Tony" Lazzeri (December 6, 1903 — August 6, 1946) was an American Major League Baseball player during the 1920s and 1930s, predominantly with the New York Yankees. The native of San Francisco, California, was a member of the original American League All-Star team in 1933. He was nicknamed "Poosh 'Em Up" by Italian-speaking fans, from a mistranslation of an Italian phrase meaning to "hit it out" (hit a home run).