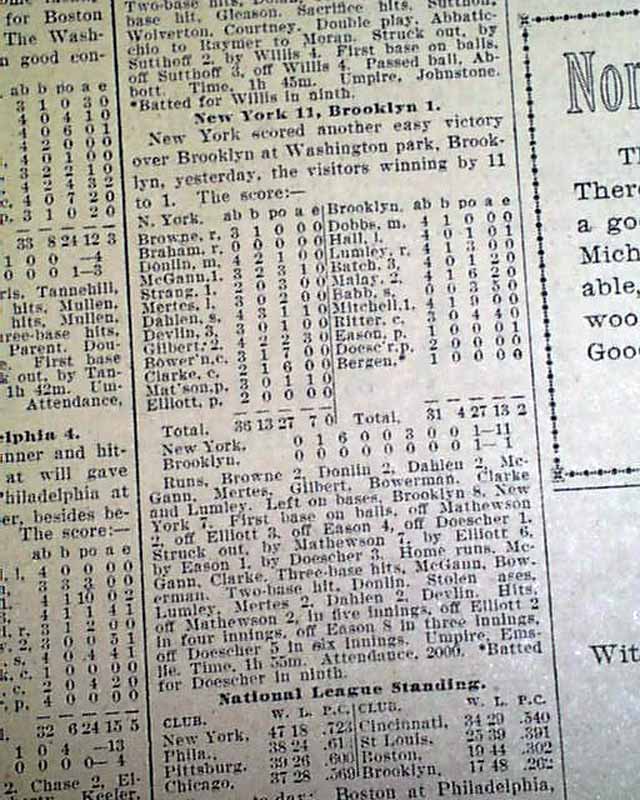 Page 3 has the baseball box score between New York and Brooklyn containing Archibald "Moonlight" Graham's only appearance in a professional game (for New York). Sadly, although a bit fitting for his character as portrayed in "field of Dreams", his name is accidentally spelled with a "B" instead of a "G".

The issue is complete and includes additional news and advertisements of the day. It is in very, very fragile condition, a rough left spine, and several edge tears (see images). It must be handled with care. An archival folder for storage/protection is highly recommended.

Spoiler alert: Anyone who has viewed the *movie-classic, "Field of Dreams," starring Kevin Costner, has been touched by Archie "Moonlight" Graham (played by Burt Lancaster). The poor fellow simply cannot catch a break. When this doctor, who had given up baseball after only 1 professional appearance in order to care for people via his physician training, was given (in the movie) a 2nd chance to get on the magical "field of dreams," he was almost immediately faced with the choice between either leaving the field (never to return) in order to save an injured young fan from near-certain death, or stay on the field and enjoy the game he had always loved. Now, in real life, we see his one appearance is marked by the misspelling of his name. How ironic.

* Based upon the novel, "Shoeless Joe," by W.P. Kinsella.