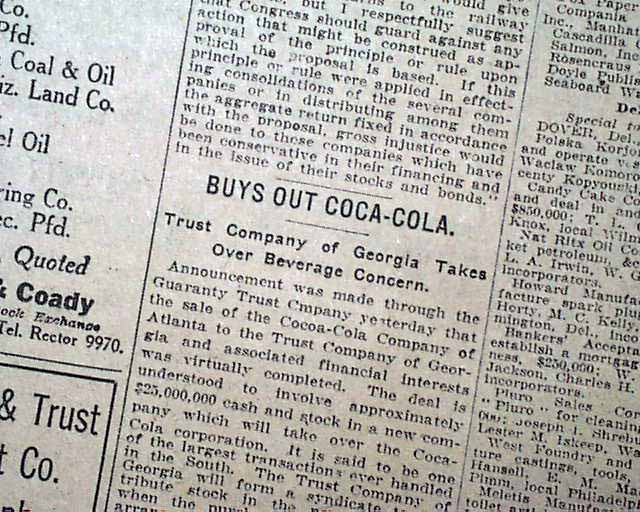 This issue has one of the more historic moments in the history of the Coca-Cola Company when Asa Chandler, the man who bought the original formula from founder John Pemberton and propelled the company to national prominence by the 1890's, sold the company to Ernest Woodruff and an investor group for $25 million. The business was reincorporated as a Delaware corporation, and 500,000 shares of its common stock were sold publicly for $40 per share. Coca-Cola had now become a publicly traded company.
Within the financial section (page 16), there is a small and somewhat inconspicuous heading: "Buys Out Coca-Cola" "Trust Company of Georgia Takes Over Beverage Concern" with several inches of text. Interesting to find this little gem item in the world of corporate history presented in such a modest manner. Little could investors at that time have known what a mega-giant Coca-Cola would go on to be.
The complete 24 page issue, disbound, very nice, clean condition.