Home > Back to Search Results > Much on the battle in Kentucky...
Click image to enlarge 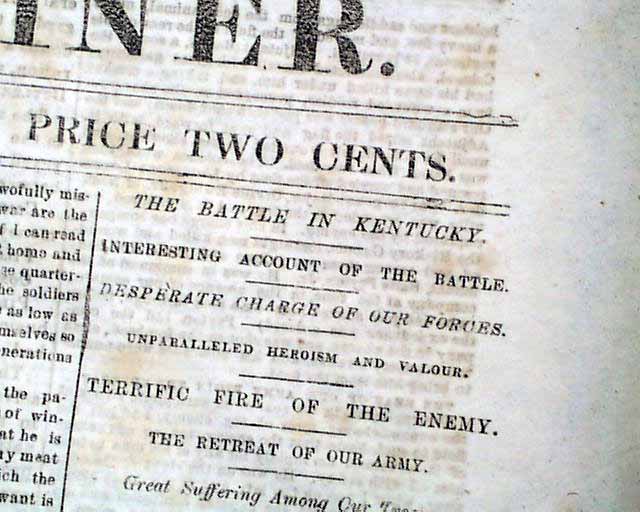 Much on the battle in Kentucky...

* Battle of Mill Springs, Kentucky
* In a Confederate title

Not only a newspaper from the Confederate States, but from the capital of the Confederacy. Among the front page items are: "The Coin Of The Confederate States" "A Virginia Mother's Appeal To the Soldiers" which is stirring (see images). Also much reporting headed: "The Battle In Kentucky" "Interesting Account of the Battle" "Desperate Charge Of Our Forces" "Unparalleled Heroism & Valour" "Terrific Fire Of The Enemy" "The Retreat of Our Army" "Great Suffering Among Our Troops" with the report carrying over to page 2.
Inside has the always-interesting editorial, this one beginning: "The Burnside expedition is a confessed failure. Its leader is regarded as a man of purpose & capacity; but he has an evil star. He led a retreating column from the field of Manassas..." with much more Another paragraph begins: "The Burnside armada has failed..." plus much more. Other items inside include: "Congressmen & 'Army Worms' " "Commercial Enfranchisement of the South" "Legislature of Virginia" & other smaller items. The back page has a lengthy list of Acts of the Confederates States.
Four pages, never bound nor trimmed, a bit of light foxing, very nice condition.