Home > Back to Search Results > Magic Johnson drafted 1st in the NBA...
Click image to enlarge 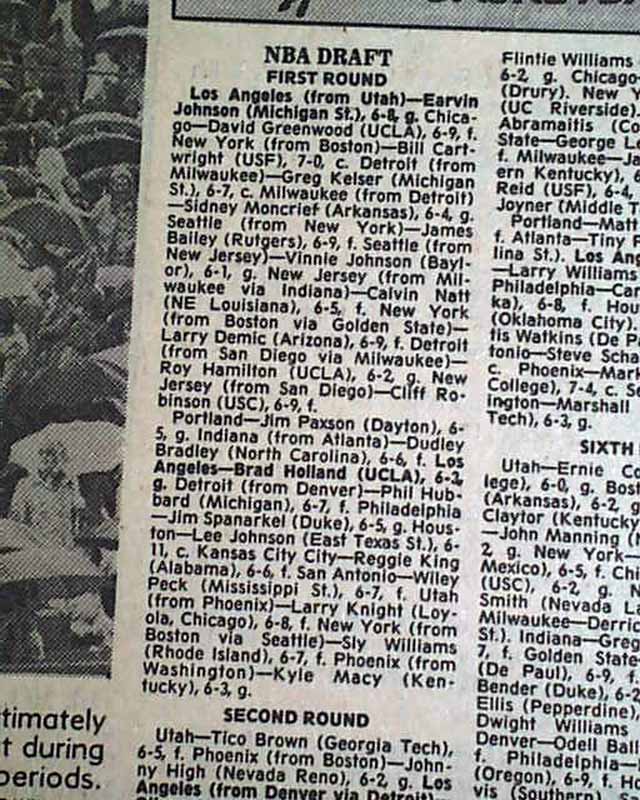 The front page of the sport's section (inside) has a two column heading: "Lakers Take 3-Point Stance in NBA Draft" with subhead. (see) First report coverage continues on page 6. Page 7 under "Basketball" has the list of the first 10 rounds of the NBA draft with the first round beginning with: "Los Angeles (from Utah)--Earvin Johnson (Michigan St.), 6-8, g." (see) I suspect this issue was not saved due to the fact that Johnson was not yet a NBA star. Very rare as such.
Five sections present here, minor margin wear, generally nice.

wikipedia notes: The 1979 NBA draft was the 33rd annual draft of the National Basketball Association (NBA). The draft was held on June 25, 1979, before the 1979–80 season.Magic Johnson from Michigan State University, one of the "hardship" players, was selected first overall by the Los Angeles Lakers. Johnson, who had just finished his sophomore season in college, became the first underclassman to be drafted first overall. He went on to win the NBA championship with the Lakers in his rookie season. He also won the Finals Most Valuable Player Award, becoming the first rookie ever to win the award.