Home > "IN God We Trust" survives a challenge... The Supreme Court rules against the handicapped...
Click image to enlarge 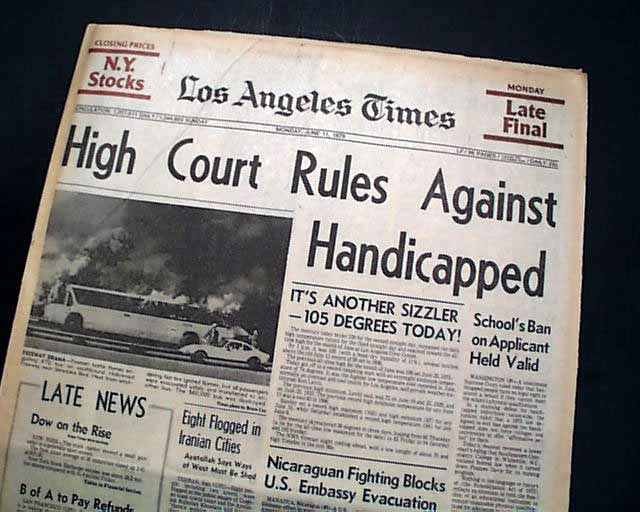 The Supreme Court rules against the handicapped...

The front page has two-line full banner heading: "High Court Rules Against Handicapped", with subhead: "School's Ban on Applicant Held Valid". The text includes, in part, "A Unanimous Supreme Court ruled today that handicapped people have no legal right to attend a school if they cannot meet the school's physical qualifications." It continues: "Nothing in the language or history of (the Rehabilitation Act of 1973) reflects an intention to limit the freedom of education institutions to require reasonable physical qualifications for admission...", with more.

Also present under this same heading is the announcement that The Supreme Court refused to hear an appeal by Madalyn Murry O'Hair aimed at having the inscription, "In God We Trust" eliminated from all U. S. coins. Wikipedia notes: ""In God We Trust" as a national motto and on U.S. currency has been the subject of numerous unsuccessful lawsuits. The motto was first challenged in Aronow v. United States in 1970, but the United States Court of Appeals for the Ninth Circuit ruled: "It is quite obvious that the national motto and the slogan on coinage and currency 'In God We Trust' has nothing whatsoever to do with the establishment of religion. Its use is of patriotic or ceremonial character and bears no true resemblance to a governmental sponsorship of a religious exercise."

Complete in 24 pages and in nice condition.