Home > Back to Search Results > Beginning the process of ending the Revolutionary War...
Click image to enlarge 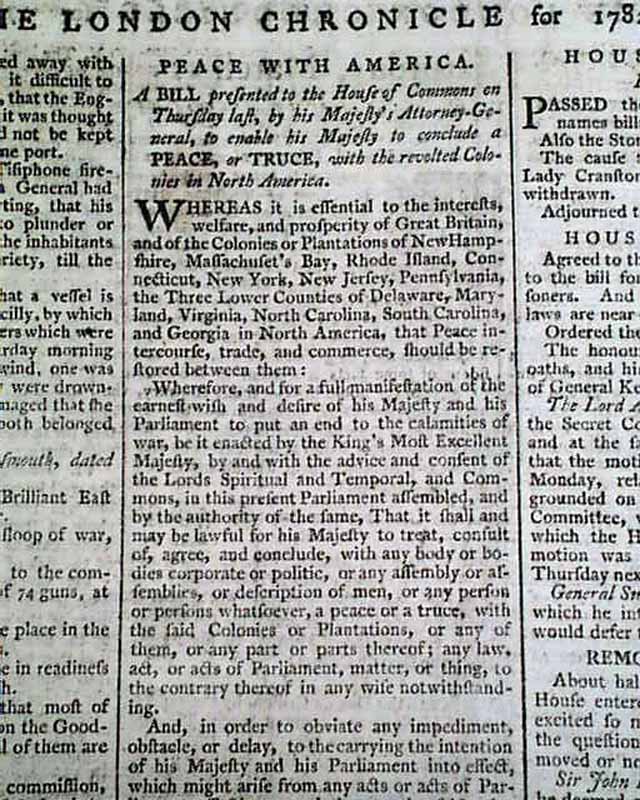 Beginning the process of ending the Revolutionary War...

Most of a column on pg. 4 is taken up with: "PEACE WITH AMERICA - A BILL Presented to the House of Commons...to enable His Majesty to conclude a PEACE, or TRUCE, with the Revolted Colonies in North America." (see for full text). This was the first step towards ending the Revolutionary War.
Page 5 has very lengthy discussions from the House of Commons which includes much reflection on the Revolutionary War, its cause, and what was done wrong. One bit notes: "...it remained only to enquire into the causes of our failure of success. In his opinion, one great cause was the countenance that had been given in that House to the American rebellion. General Washington's army had been called our army;--the cause of the rebels had been called the cause of Liberty...he highest praises & encomiums had been bestowed on Dr. Franklin & Mr. Laurens... with so much more.
Eight pages, 9 by 12 inches, never bound nor trimmed, very nice condition.