Home > Back to Search Results > Early Georgia... Map of the English Channel...
Click image to enlarge 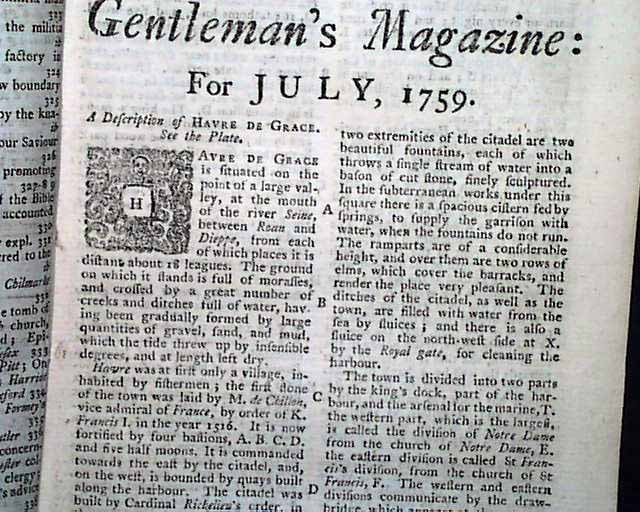 Item # 644382
THE GENTLEMAN'S MAGAZINE, London, England, July, 1759  The first article is: "A Description of Havre de Grace" which takes over a full page and is accompanied by a nice foldout map showing part of the English Channel including the Isle of Wight off the coast of Southampton and also the coast of Normandy including Havre de Grace. There are two detailed insets, one showing the "Plan Of Havre De Grace" and the other showing "The Bombardment of Havre De Grace, July 4th, 1759". This map folds out to 8 1/4 by 10 1/2 inches (see).
Also within is: "An Account of the Heat of the Weather in Georgia, by Hen. Ellis, Esq. Governor" datelined from Georgia, July 17, 1758. An interesting and early article on Georgia which takes over a column (see). Also a lengthy article on the: "Life of Mary Stuart, Queen of Scotland".
The foldout map noted above is the only plate called for.
Complete in 52 pages with a full title/contents page featuring an engraving of St. John's Gate. Measures 5 by 8 1/4 inches.


A very nice magazine from the "mother country" during the French & Indian War, with a wide range of varied content including news of the day, political reports, literary items, and other unusual tidbits. This was the first periodical to use the word "magazine" in its title, having begun in 1731 and lasting until 1907.