Home > Back to Search Results > Battle of Bunker Hill... The Gunpowder Incident...
Click image to enlarge 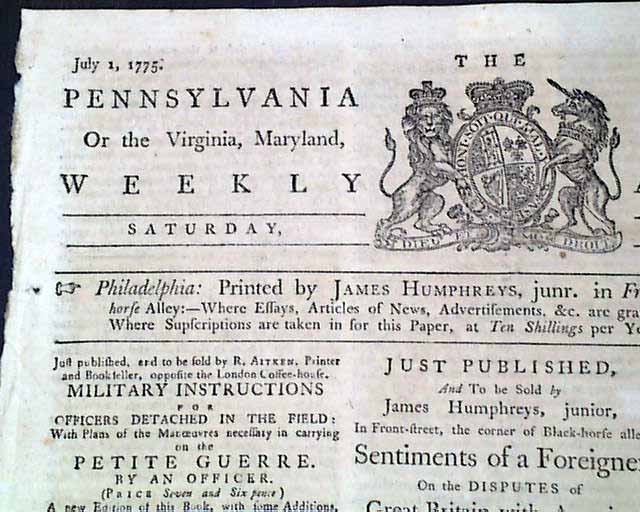 The most significant content would be a fine account of the very historic Battle of Bunker Hill, being a letter datelined: "Watertown, June 22" and includes in part: "Before this reaches you, you will doubtless hear of the engagement of last Saturday between our troops and those of the army at Boston; but lest you should not be well informed, I will now undertake to give you as regular an account as can at present be obtained..." and what follows are the details of the battle, one portion including: " ...Last Friday evening, a detachment from the camp at Cambridge marched to Charlestown, and there took possession of Breeds-Hill…about two o’clock, when a large army of between four and five thousand men…under the command of General Howe landed on the back of the hill, and marched up with great seeming resolution towards our lines; our men reserved their fire till the enemy had advance very near, when a general engagement ensued; the fire from our lines was so excessive heavy, and made such a terrible slaughter as obliged the enemy twice to give way…”(see). Included is mention of the death of General Warren who was killed in the action at Bunker Hill: "...The brave & worthy "Dr. Warren was killed, stripped, and buried within the entrenchment. Our numbers killed are not yet known, but  by the best accounts I can obtain, it will not much exceed 30...".
Also inside is a confirming report noting: "A letter dated in Roxbury, June 22, gives much the same accounts of the action of the 17th that we have in the above account...appears that our loss was 58 killed & missing & about 90 wounded..." and a bit more (see). This is then followed by a: "Extract of a Letter from Watertown dated June 21) which gives more concerning Bunker Hill, including: "...thunder of cannon reached my ears some miles before I got here: the army of Britain sallied out & were then engaging our people who had attempted a lodgement on Bunker's Hill...the regulars were twice repulsed with excessive slaughter...Our troops are in high spirits & eagerly wish for another trial. We have meet with one capital loss; our worthy friend Doctor Warren was slain in the trenches, bravely struggling for the liberties of his country..." and a bit more (see).
Page 2 has a lengthy letter from signed by Governor Dunmore datelined "Williamsburg, June 17" which is prefaced with: "The Governor's Answer...in Consequence of the Message...upon his Ridiculous Flight on Board the Fowey man of war." which concerns the famous Gunpowder Incident (see the web for more) which includes in part: "...it appears to me the commotions among the people & their menaces & threats...His Majesty's magazine having been forced & rifled in the presence of some of the members of the House of Burgesses....prevail on the people to return the arms taken out...when a body of men assembled in the city of Williamsburg...for the avowed purpose of attacking a party of the King's forces...With respect to your entreaty that I should return to the palace...my return to Williamsburg would be as fruitless to the people as possibly it might be dangerous to myself..." and more.
Page 3 has: "The Address of the Provincial Congress of...New York to his Excellency GEORGE WASHINGTON, Generalissimo of all the Forces Raised...in the Confederated Colonies of America" which has very patriotic text including: "...we have the most flattering hopes of success in the glorious struggle for American Liberty". This is followed by "His Excellency's Answer" which is signed in type: G. Washington (see)
Four pages, and in simply great condition.