Home > Back to Search Results > On Ben Franklin's water spouts, with a print...
Click image to enlarge 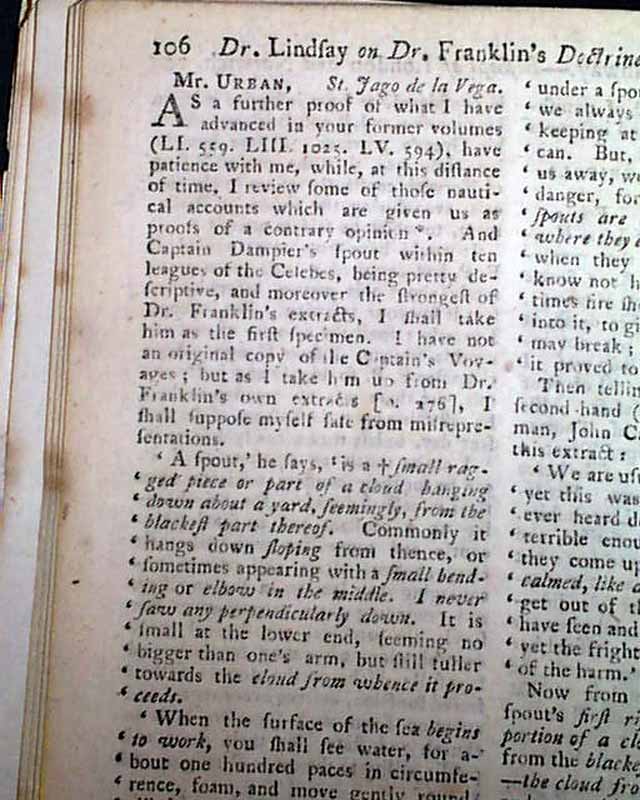 On Ben Franklin's water spouts, with a print...

Perhaps the most interesting article is: "Dr. Lindsay on Dr. Franklin's Doctrine of Water-spouts" which comments on Ben Franklin's work (see for portions). This article takes 2 1/2 pages and one of the plates includes prints of various water spouts.
An article: "Edict in Favour of America, Issued at Paris" begins: "While the British court are endeavouring in some measure to discourage the American trade, the French are pursuing the quite contrary policy..." with more taking more than a full page. Among other items of interest in this magazine are: "Original Letter on the Salmon Fishery in the Tweed" "Summary of the Proceedings in Parliament" "Second Manifesto of the Empress of Russia" being Catherine the Great; and much more. Also an interesting & lengthy article: "Circular Report of the Committee for Abolishing the Slave Trade".
Included are 2 of the 3 plates called for, one showing the waterspouts as noted above.
Complete in 96 pages, 5 1/2 by 8 3/4 inches, full title/contents page with a engraving, nice condition.