Home > Sea monster in the North Sea... A voyage around the world...
Click image to enlarge 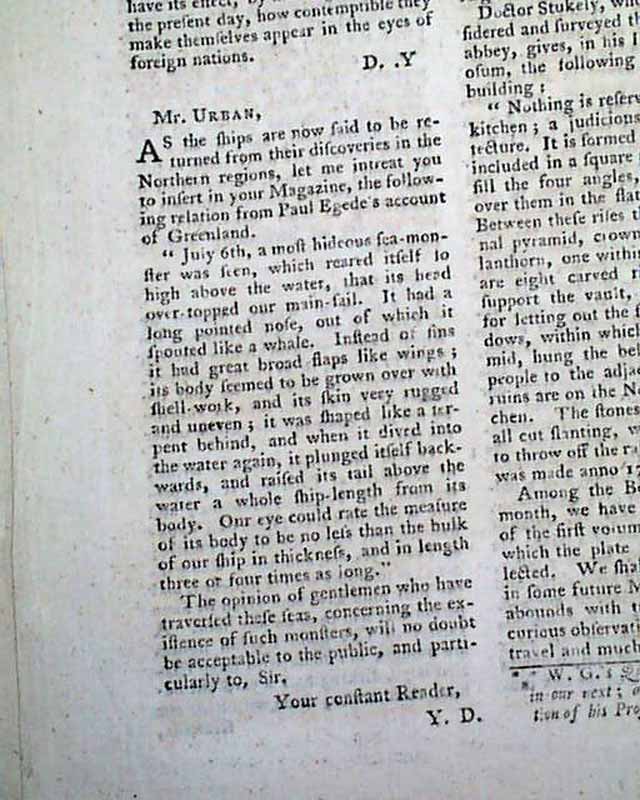 Sea monster in the North Sea... A voyage around the world...

GENTLEMAN'S MAGAZINE, London, Oct., 1773  Among the articles is a continuation of: "Capt. Wallis's Voyage round the World" which takes 7 pages, with great detail.
Also intriguing is a report of: "...a most hideous sea monster was seen, which reared itself so high above the water that its head over topped our main sail. It had a long pointed nose out of which it spouted like a whale. Instead of fins it had great broad flaps like wings...its skin very rugged & uneven..." with more on this "Monstrous Serpent in the North Sea".
Another article: "An Easy Method of Distilling Fresh water from Salt Water at Sea...", includes an accompanying full page plate.
Several pages are taken up with an intriguing edict from the King of Prussia, assessing a tax on all imports from England due to the Prussian ancestors having played such a significant role in the development of the colonies for which they were never repaid. At its conclusion the British are unsure if this is serious or just a witty, comical creation.
Near the back is nearly a column of: "American News".
Present are two full page plates.
Complete in 48 pages, 5 1/2 by 8 3/4 inches with untrimmed margins, full title/contents page, nice condition.