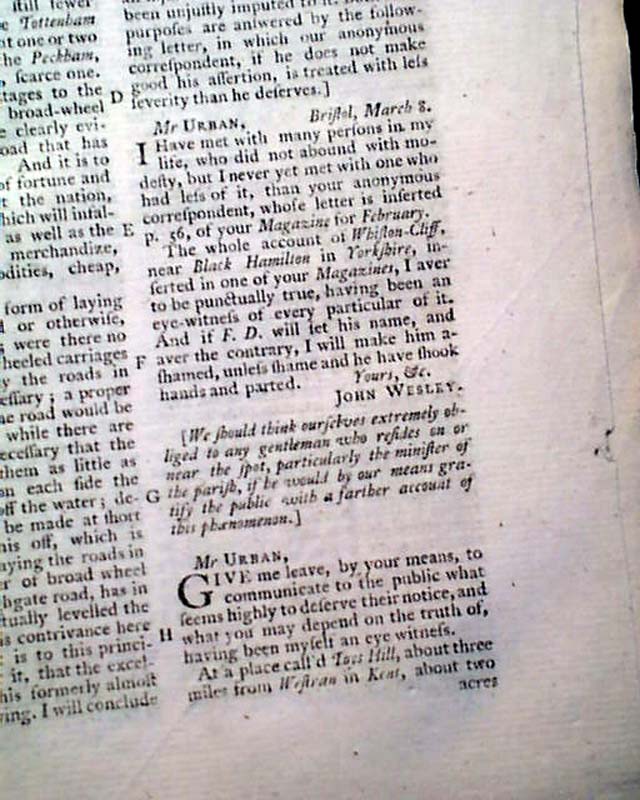 Item # 642765 THE GENTLEMAN'S MAGAZINE, London, March, 1756  Among the articles within is a "Letter from Mr. Wesley Confirming the Yorkshire Earthquake", signed by him in type: John Wesley, the noted evangelist and founder of Methodism.
Also: "Of the Cultivation of Exotics" which concerns the red cedar & other trees in America. Another article taking over 3 pages is "A Dialogue between X, Y. and Z Concerning the Present State of Affairs in Pennsylvania" with much relating to the recent Militia Bill and the exempting of Quakers from military service (see for the beginning). Near the back is the "Historical Chronicle" with news reports of the day including an oblique reference to the French & Indian War with: "Arrived in Plymouth six transports with Gen. Otway's Old Bluffs, & Lord John Murray's regiment of Highlanders from Ireland. They are already embarked for America" (see).
No plates or maps are called for in this issue.
Complete in 56 pages, 6 by 8 3/4 inches with wide, untrimmed margins, full title/contents page with an engraving of St. John's Gate, very nice condition.