Home > Back to Search Results > Reports from the ending events of the Revolutionary War...
Click image to enlarge 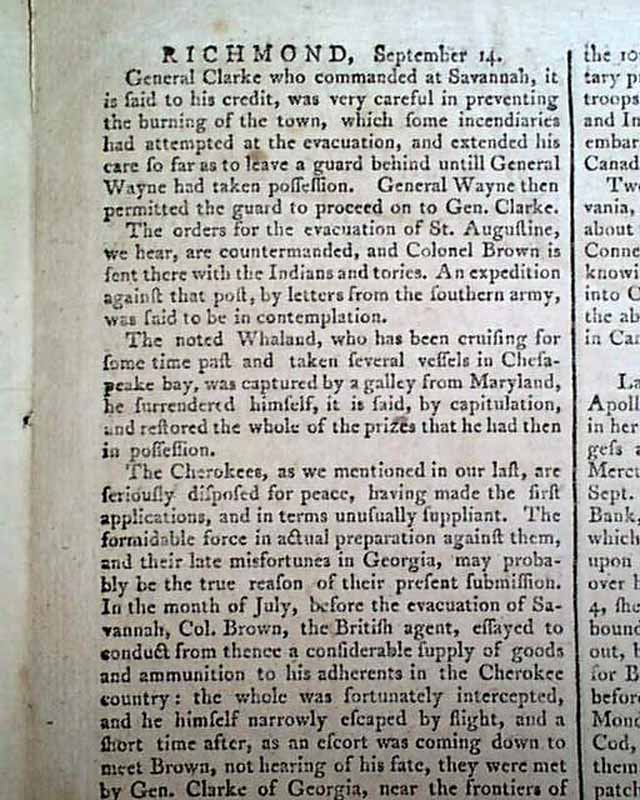 Reports from the ending events of the Revolutionary War...

Page 3 begins with a report from "Richmond" which includes: "General Clarke who commanded at Savannah...was very careful in preventing the burning of the town, which some incendiaries had attempted at the evacuation & extended his care so far as to leave a guard behind until General Wayne had taken possession...The orders for the evacuation of St. Augustine, we hear, are countermanded, & Col. Brown is sent there with the Indians and tories..." Also some text on the Cherokees in Georgia, noting they: "...are seriously disposed for peace...".
A letter from Camp at Verplank's Point includes: "...that Sir Guy Carleton has requested a cessation of  arms of General Washington. The General returned in answer to Sir Guy, that he was surprized he should request a cessation of arms  when his army was committing so many depredations on the inhabitants of different parts of this State. Sir Guy, in return, said, that  the General might depend  upon it, a treaty of peace was certainly on foot." Another item notes: "...that upwards of 7000 inhabitants of New York have signed a paper of agreement for removing to Nova Scotia. General Gates commands the right, and General Heath the left wing of the American army."
Many other items  relating to the Revolutionary War (see).
Four pages, never bound nor trimmed, small piece from above the masthead does not touch any text, generally nice condition.