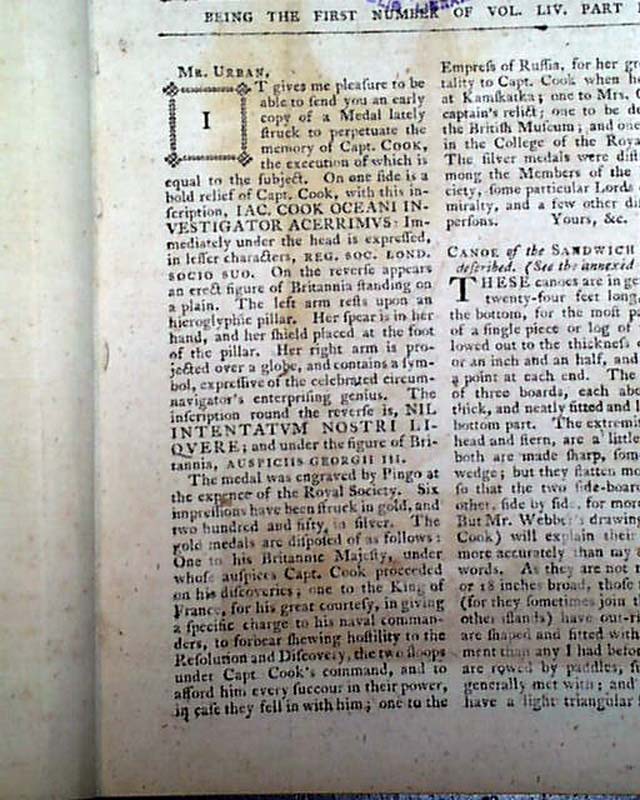 Item # 641387 THE GENTLEMAN'S MAGAZINE, London, July, 1784  The issue begins with a description of a medal created in honor of the late Capt. Cook and which is accompanied by a plate of it. The front page also has an article: "Canoe of the Sandwich Islands Described (which is Hawaii), which is also accompanied by a great foldout plate, more typically lacking.
Another article of interest is: "Memoirs of Major-General Greene, in the American Service, late Commander in Chief in South Carolina" which takes over 2 1/2 pages and includes discussion of some of his major battles and a very nice review of his efforts in the Revolutionary War.
Near the back is: "Foreign Intelligence" which has half a column of: "Advices from America" concerning a meeting of the Cincinnati Society which elected George Washington as its chairman. There is also "By the King, a Proclamation" which mentions the treaty of peace with America.
Both of the two plates called for are present and noted above.
Complete in 80 pages, 5 by 8 inches, with a full title/contents page featuring an engraving of St. John's Gate. There are library stamps to the reverse of both plates as well as at the top of pg. 1.