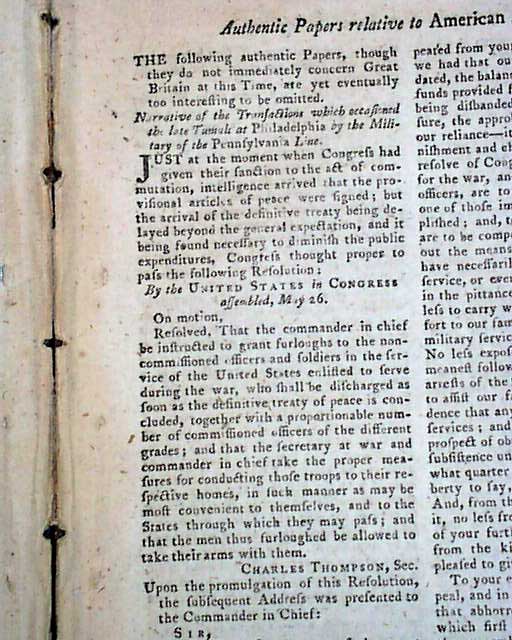 A 2 issue set. The August issue has a section headed: "Authentic Papers Relative to American Affairs" includes reference to learning of the Treaty of Peace ending the Revolutionary War, and also includes a "Resolve" from Congress concerning the mutinous soldiers in Washington's army, along with Washington's reply. This is followed by "A Proclamation" from Congress which begins in part: "Whereas a body of armed soldiers in the service of the United States...having mutinously renounced their obedience to their officers..." with more (see for portions).
This is followed by the first portion of General George Washington's official resignation as commander-in-chief of the armies at the conclusion of the Revolutionary War (see for portions), and which concludes in the September issue, included here as well.
All of the above take nearly 5 pages of text.
Further on in the Sept. is another nearly full page of text headed: "American News" containing a variety of news reports.
The August issue has both plates called for and the September issue has both of its plates as well, one a foldout of St. Paul's Cathedral "...as originally designed by Sir Christopher Wren."
Both issues measure 5 1/2 by 8 3/4 inches with wide untrimmed margins, a total of 176 pages with a full title/contents page at the front of each.
You get both the August & September issues giving the complete text of Washington's Farewell Address.